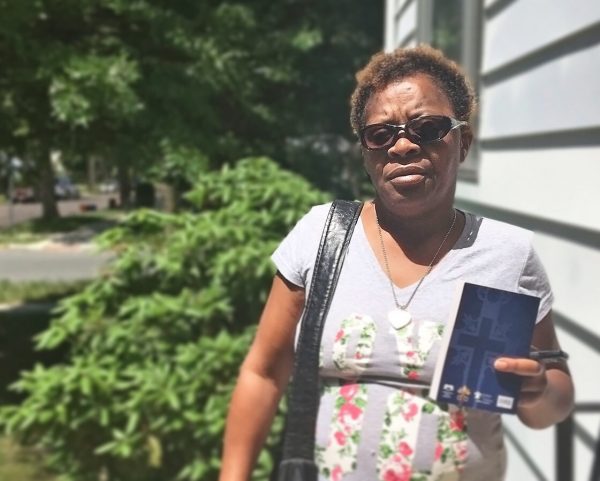 “I remember the date well, because I lost my father to cancer two days before that,” recalled Ortiz, a 55-year-old grandmother, with her hands gently folded on her lap.

Dec. 6 was the date when the water in Ortiz’s Vineland home completely stopped working.

Despite many requests, her landlord did not fix the problem. “I eventually began filling water jugs and carrying them back home so that my family would be able to eat and bathe and clean,” she explained.

And just as winter approached, the heat also stopped working in the home.

Still coping with the loss of her father, Ortiz began the process of contacting the city for help. Multiple citations, fines and court orders failed to spur the landlord to improve any of the wretched conditions in the home.

Unable to maintain proper sanitation without running water, Ortiz soon discovered an infestation of cockroaches in her apartment, including in the beds of her grand-nephews, ages 13 and 15, for whom she has had sole custody since they were infants.

The home failed inspection because of its unlivable conditions, ultimately leading to CP&P [formerly the Division of Youth and Family Services, DYFS] removing the children from the home.
“I cried and I prayed. I did everything in my power to fix the situation for my family, but nothing was working,” she explained.

Left with no options, Ortiz heard about the Society of Saint Vincent de Paul and contacted them, hoping for help. They immediately called Cynthia Lebron, regional coordinator of Salem and Cumberland counties for Catholic Charities, who sprang into action in partnership with Saint Vincent de Paul, helping Ortiz get out of her home and temporarily setting her up in a hotel.

On her own, a determined Ortiz found a new home, and Catholic Charities and Saint Vincent de Paul were able to provide her with a security deposit so that she was able to move in. Ortiz now lives there, reunited with her grand-nephews.

Now that she had a new home, she needed some clarity in terms of what her next steps would be. Lebron and other Catholic Charities staff provided her with guidance and financial counseling, and helped her with budgeting, as she embarked on a new life.

These last six months, with all of the challenges that Ortiz has experienced, have given her a new-found empathy for others.

“Now I look around differently at people, at strangers, and I wonder what they’re going through. I wonder what their situation might be and what help they might need. I know people out there are suffering. And I want to help them, I want to tell them to keep their heads up, to keep fighting, because hope is out there.”

She also reflected upon forgiveness, as she sat in Lebron’s office recently.

“I’ve learned that I can’t ask the ‘why me?’ questions. I think about my previous landlord. I don’t know where he is now. All I know is that there’s a bench warrant out for his arrest. It would be so easy to hate him for all that he put my family through, and some people have even advised me to sue him,” she said. But thumbing through a well-worn copy of the Bible resting on her lap, Ortiz added, “But this here says to love your enemies. I don’t want to bring anyone down. I want to lift them up. So now, I pray for him.”

Cynthia Lebron explained just how important sustainable living conditions are. “When she was stuck living in that situation, it interrupted everything in her life. She was unable to attend to her health. But her main concern was always the children — she thought about everyone else before herself, and always maintained a determined outlook and positive attitude.”

The shattering chain of events that began on Dec. 6, 2016, are in the rearview mirror for Ann Ortiz now. She presently lives in a stable home in Millville.

“I love the new home. The kids love it. I couldn’t be more thankful. Every day I think about Catholic Charities, and how if it weren’t for them, I would still be living in hell,” she said.

Ortiz’s medical conditions have drastically improved, and she is now cancer-free, but still attending regular check-ups with her doctors.

“Everything in life just seems…brighter. That’s the word I think of. On my way here today, that’s all I could think about. What a beautiful day it is.”