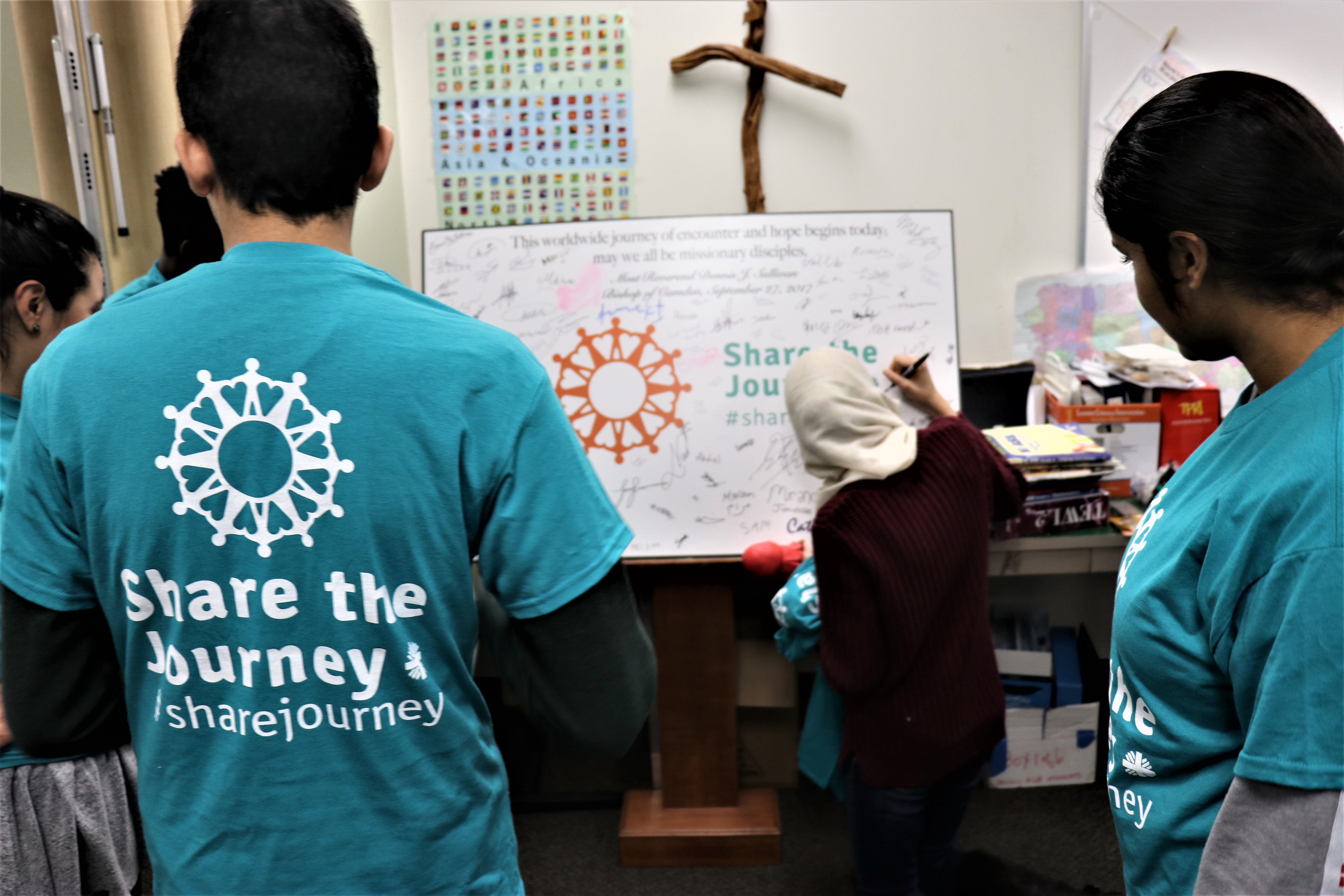 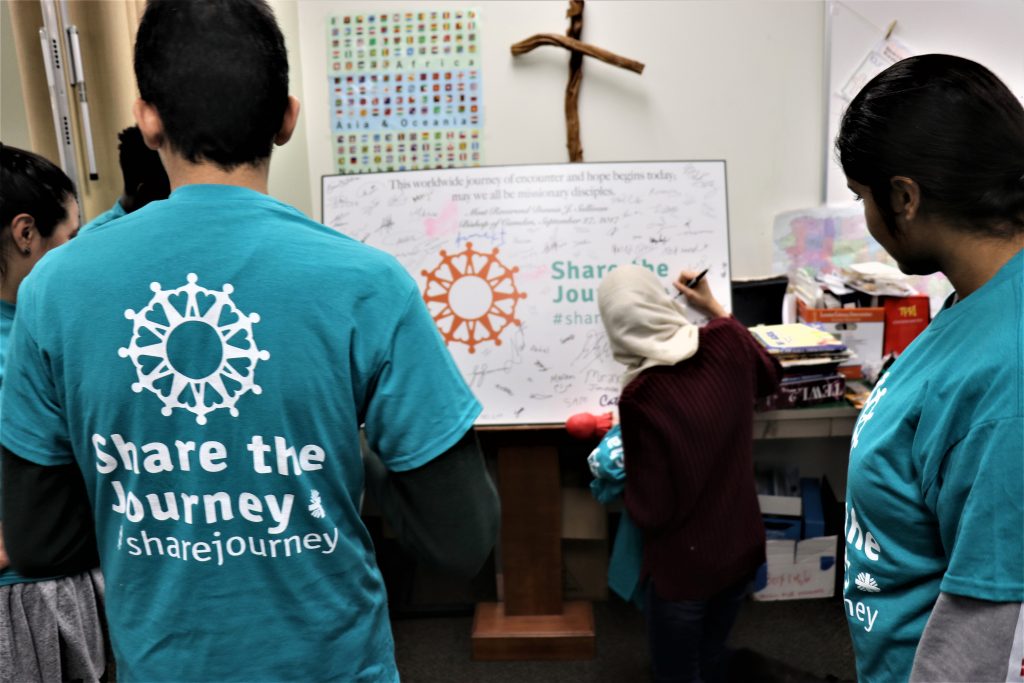 After helping organize a toy giveaway, young refugee clients and volunteers sign a “Share the Journey” poster that was first signed by Bishop Dennis Sullivan during the launching of the campaign.

For nearly 50 years, the Catholic Church has celebrated National Migration Week, which kicks off this weekend, Jan. 7. This year’s purpose takes on a special significance in light of Pope Francis launching the two-year Share the Journey campaign in September 2017.

Share the Journey is a worldwide effort to build understanding and support within local communities for immigrants and refugees who have come to new lands to rebuild their lives. The campaign is sponsored globally by Caritas Internationalis and in the United States by Catholic Charities USA, the U.S. Conference of Catholic Bishops, and Catholic Relief Services.

After Bishop Dennis Sullivan launched the campaign in the Camden Diocese, Catholic Charities immediately began to organize activities ranging from panel discussions at universities, to carnivals and toy giveaways for children, to luncheons and gatherings at schools involving local youth and young adult groups. All get-togethers had one goal in mind: creating an opportunity for refugees and the community to encounter “the other.”

“National Migration Week, and the Share the Journey campaign in particular, are invitations to people of all ages to engage with migrants in a meaningful way, and to be warm and welcoming of these newcomers,” noted Patrick Barry, director of Refugee and Immigration Services at Catholic Charities, whose mother was a Cambodian refugee who fled the Khmer Rouge regime in the 1980s.

“It’s been amazing to see how many groups, nonprofits and institutions have engaged in this campaign and demonstrated their support,” he said.

One of the first Share the Journey events to take place in the diocese was a carnival held at Catholic Charities, where staff, refugee families, parishioners and volunteers gathered together for a day of games, fun and interaction. 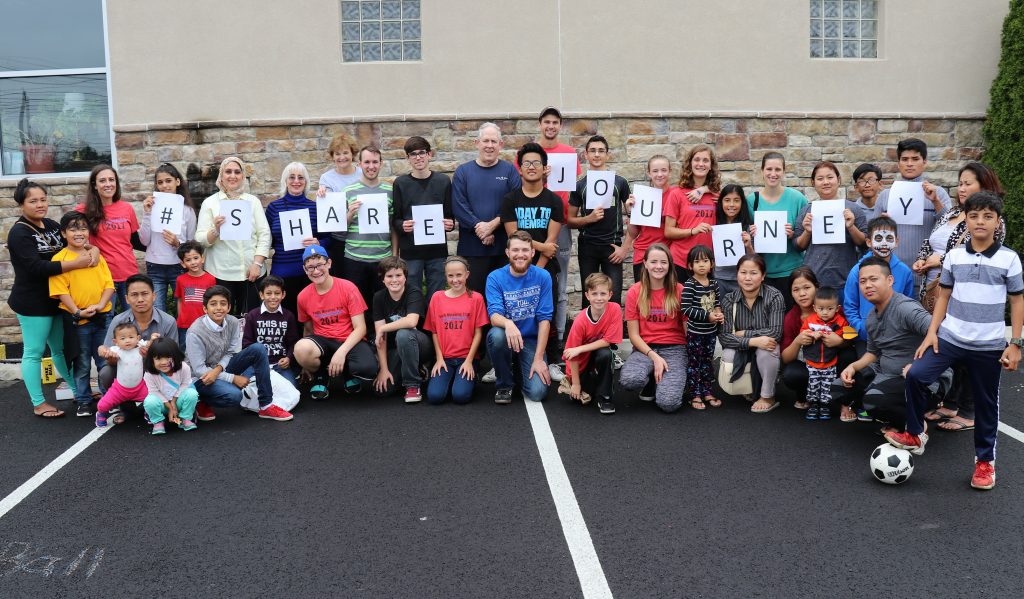 The slight rain did not put a damper on the carnival held by Catholic Charities, which offered refugees, migrants, volunteers, parishioners, and other community members the opportunity to interact, learn, and encounter.

A soccer ball flew across the parking lot, catching the eyes of dozens of teens who took off running toward it before it hit the ground. Two noisy minutes later, mixed teams of youth group members and refugees from several different countries were arranged, rules were established, a referee was designated, and an impromptu game began. Light rain did not damper the spirit of comradery that sporting activities seem to naturally generate among players. A  volunteer awards Abdulrazak Alajrab, a young refugee from Syria, with tickets for a prize during Catholic Charities’ carnival for refugees, where staff, volunteers, refugee clients and parishioners engaged in a day of fun and games.

Taking shelter from the drizzle under an awning, a volunteer laughed. “It’s just so funny. Games are universal,” she said.

“It doesn’t matter who is from what country or who speaks what language or who is on what team. As soon as they see a soccer ball, the game is on,” she said, as a goal was scored and celebration broke out among players on the victorious team.

Each year, Catholic Charities resettles about 100 refugees who were forcibly displaced from their home countries, each bringing with them their own background, culture, skills, struggles and life stories.

Khin San Htay fled her home country of Myanmar due to the increasing violence and forced labor in her village. Reflecting on her own journey, she said, “We had no choice but to leave, our lives were in danger.

My husband and my children and I fled to Malaysia, but it wasn’t safe there either. The police were constantly looking for refugees, and we never knew if they would come to take us away.
“I was pregnant at the time,” she said, holding back tears. “I will never forget that fear.”

She continued, “But Catholic Charities has been there for us every step of the way since we arrived here. In this country, my children get a good education, a safe education. [In Myanmar], I was never educated past fourth grade. And I know that if they try hard enough, they’ll succeed here.”

Another refugee from Myanmar, Stephen Ah Tang, said, “In this country, life is secure. People have rights, and human lives are valued.”

Refugees from Myanmar (Burma) are one of the largest groups of individuals who have been resettled through Catholic Charities over the past decade. Their lives had been upturned in their country due to increasing violence as a result of the civil war there that has been ongoing since 1948 — labeled as the longest civil war in history.

Others came from various countries in Africa, South America and the Middle East. All of them had fled due to conflict, persecution, and violence that put their lives and those of their families in constant danger.

Sayed Mohammed Latif came to the U.S. with his wife in 2017 from Afghanistan. Latif, who worked as an interpreter for the U.S. military during their occupation of his country, faced immense danger from insurgents for working with the United States. At the age of 24, he and his wife came to Catholic Charities to start a new life, and with a new life came new ambitions.

Speaking in English, he spoke of his journey. “When [my wife and I] came here, all we wanted was a peaceful life. I had earned a degree in engineering in Afghanistan, and I want to be a good engineer here in the United States. And since I’m young enough, maybe I can go back to school to earn my master’s degree, or maybe even a Ph.D., who knows,” he said, smiling.

“In [war-torn countries], children don’t have access to basic resources like medical help or education. And if these people need to leave their countries to stay alive, it would be best if other countries with the capability would help them, so that they can live a peaceful life.”

The struggles of these refugees, and millions of others like them, was the reason that Catholic Charities, Diocese of Camden, chose to honor one of the fiercest advocates and protectors of refugees at its 2017 Justice for All Dinner: Cardinal Joseph Tobin, Archbishop of Newark. He was honored with the Saint John Neumann award, and received a clay sculpture of the Share the Journey logo, a hand-made gift crafted by four Catholic Charities refugee teens from Syria, Pakistan and Afghanistan. 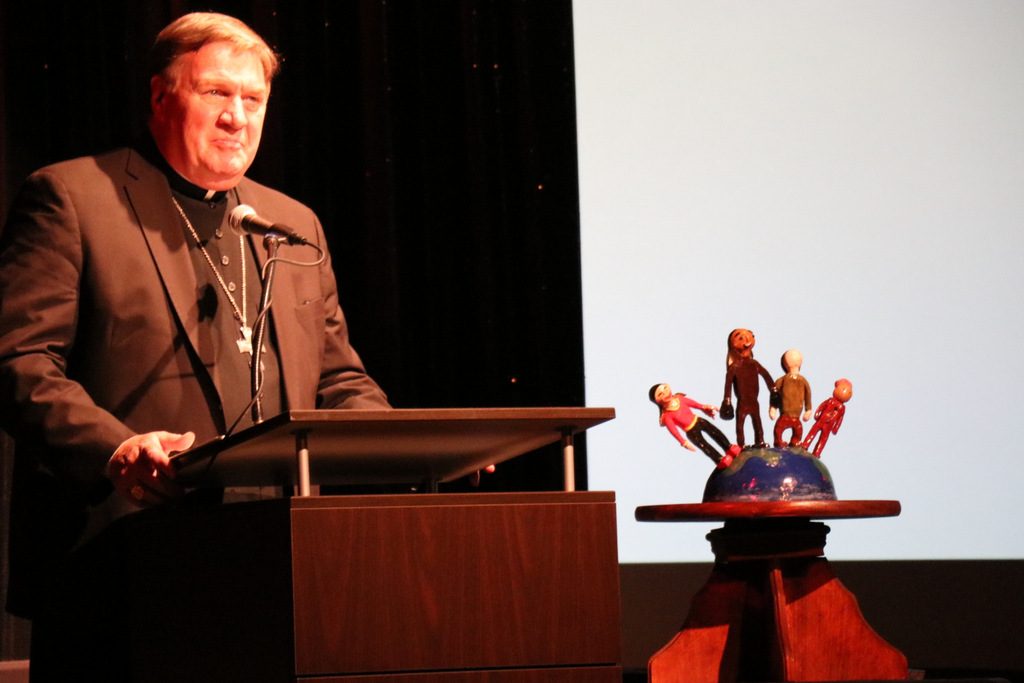 “As Catholics, we believe in the human dignity of all people. And so we are called to stand with refugees and immigrants as our brothers and sisters,” said Kevin Hickey, executive director of Catholic Charities, Diocese of Camden, and Catholic Charities USA Trustee.

“Over the next two years, we hope to continue to facilitate encounters with these newcomers to help our South Jersey community welcome them as neighbors, and as friends,” he said.

Learn more about the Share the Journey campaign here. 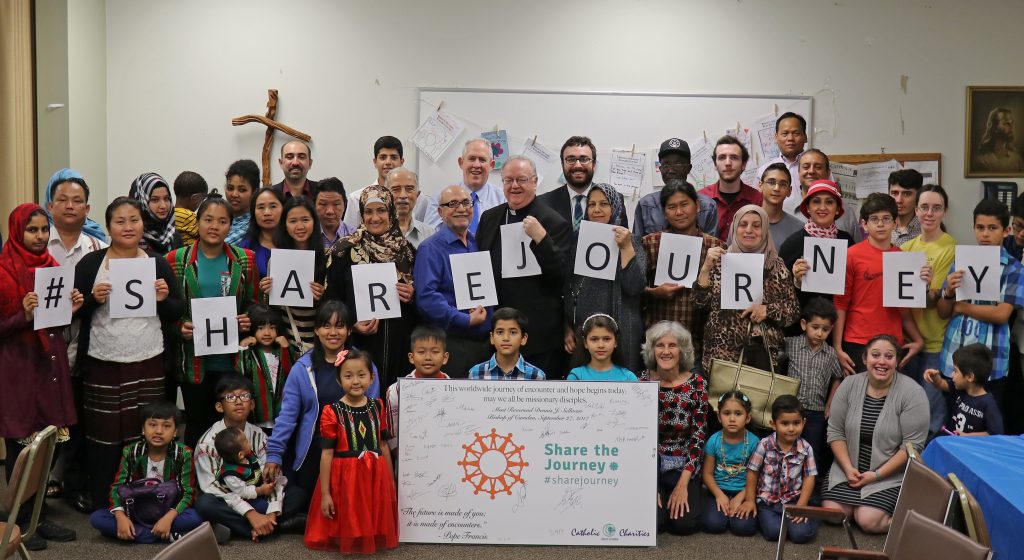