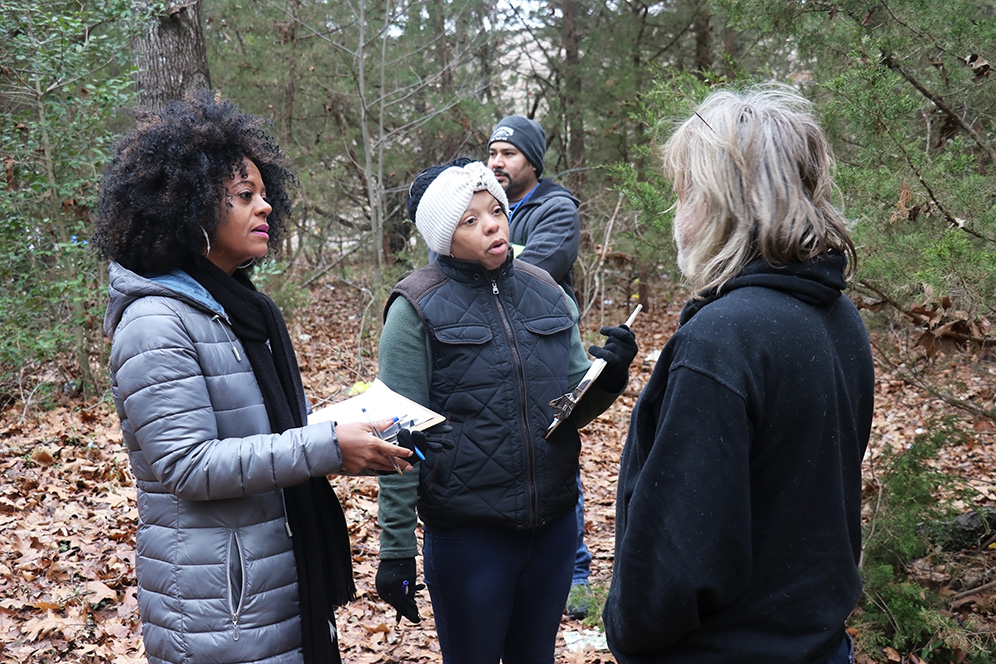 We often say these words to friends when welcoming them into our homes, which perhaps hadn’t been tidied to perfection prior to their arrival.

But in this case, the apology came from a man who had no home. After hurriedly brushing the leaves and dirt off of his worn-out jeans, he again apologized. “Normally it’s not this messy,” he said, pointing toward a makeshift work station — a table full of tools, wood and scrap metal, which he sells for a few dollars to pay for his basic necessities.

Next to his work station stood his tent, located in the woods of Vineland. Snow was still on the ground, and smoke could be seen curling from the chimney of a nearby home visible through the barren trees. He introduced himself as Mark, and this was what he has called home for the past two years.

Mark, who found himself homeless after losing a job and struggling to keep up with medical bills, stood barefoot on the frozen ground. “It’s OK, I’m used to it,” he said with a smile when he was offered warm boots and socks. After reluctantly accepting them, he only asked for one more favor: “Please say a prayer with me.” The team obliged.

Mark was one of hundreds of homeless individuals who were surveyed on Jan. 23 during the annual “Point in Time” count in Cumberland County — a one-day street-based and service-based survey of sheltered and unsheltered individuals to identify the number and characteristics of people in the Cumberland County area who are homeless.

Cindy Lebron, Catholic Charities’ regional coordinator for Cumberland and Salem counties, explained the importance of this annual count. “Getting a handle on the number of people experiencing homelessness in our community, as well as what their specific challenges are, helps agencies like Catholic Charities tailor our services and drive our planning efforts to effectively address this problem in our local area.”

On this day, Catholic Charities staff, along with other volunteers from various agencies, put their regular duties on hold, split into teams, and spent the day canvassing the county — on the streets, in the woods, in soup kitchens, and other areas well-known for homeless populations.

In addition to providing homeless individuals with hygienic supplies and care packages, staff and volunteers surveyed each homeless person they encountered to assess their needs, gain a better understanding of what led to their situation, and provide them contact information for social service agencies to help them move forward toward more stable living.

Surveys revealed a wide range of causes of homelessness: mental illness, physical illness, eviction and foreclosures due to medical bills and other expenses.

“Heroin,” said one man who was surveyed. “That’s why I’m homeless. Heroin. I lost my whole family to it. It’s everywhere.”

Another woman was too afraid to leave her tent. Explained her husband, “She suffers from schizophrenia and has epilepsy. Sorry, but she can’t talk to you.”

Two trained volunteers who spent the day surveying the homeless reflected on their encounters as the van approached its final destination for the day: the woods behind one of the shopping plazas in Cumberland County. “We’ve lived in this area our whole lives,” said one volunteer. “It’s crazy to see how people in such need live literally in our backyards.”

Explained Lebron, “We view adequate housing as a first necessary step out of poverty. Without a roof over their heads, it’s hard for individuals to overcome obstacles like mental and physical illnesses, addiction, and employment.

“Everyone deserves a home,” she added.