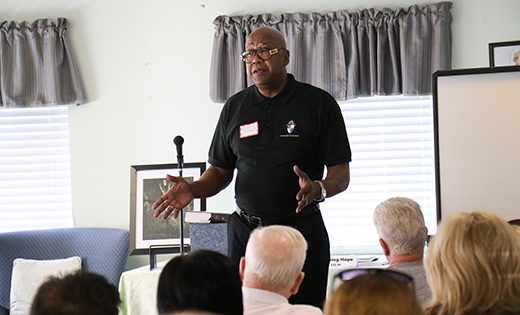 VINELAND — “I didn’t really even think about people in prisons until I had a family member who ended up behind bars,” said one of the attendees at the Camden Diocesan Prison Ministry Conference, held at the Saint John Paul II Retreat Center in Vineland on Sept. 21.

Deacon Seigfried Presberry, director of the Prison Ministry Program in the Archdiocese of Baltimore, reinforced that sentiment in his keynote talk when he said, “You never know when the day might come when you get a phone call that one of your loved ones is facing incarceration.”

Deacon Presberry, a Baptist who converted to Catholicism and was ordained a permanent deacon, worked for years as a prison corrections officer, giving him perspectives both inside the prison as a staff member and outside as a prison ministry director.

He shared a story about a woman who came to him after being released in the middle of winter and did not even have a coat.

“And beyond that, when people are released, many of them don’t have anything else, either. No job, money, health insurance, housing, sometimes no family or friends — nothing. And you know the first place they go to when they’re out?” he asked. “To church. Right next to us in our pews, weak and weary and hopeless. Family members you see at Mass have incarcerated loved ones and are suffering, but they’re too afraid to express their pain because of the stigma that comes with that.”

Deacon Presberry noted that the state of New Jersey has roughly 39,000 individuals behind bars. Which means, he said, “We as a church must break free of the stigma of incarceration. The incarcerated and their loved ones look to us for comfort, for trust. And through accompaniment and solidarity, we must be missionary disciples to those returning to the church,” he said.

“Prison Ministry is an underappreciated ministry, and the wounded need us — whether they are current inmates, former inmates, or loved ones. They are crying out, and we need to listen,” he said.

According to one longtime volunteer at the conference, “It’s a different kind of volunteerism. It’s challenging, and you don’t always get the ‘feel good’ feeling. But it is rewarding, and it is what we are called to do as Catholics. It’s right there in the Gospel.”

Sister Mary Cronin spoke of the diocesan-wide underwear drive that took place last year. “I did not know if anyone would want to donate when we put out the word, but my office was filled with boxes of donations for months,” she laughed. “We even had shipments coming from out of state — one from as far as California.”

These donations were then given to Marsha Smith, who worked to distribute them to the men and women in the facilities, who were astonished that individuals wanted to donate these items to them, imprisoned strangers. Noted Smith, “Many of them have been walking around in the same pair of underwear for weeks, because that’s what can happen if they don’t have money or family who will bring them these items. How can we expect them to feel like dignified human beings without something so simple?”

A visual testimony to countless tales of trauma

Inside of the Saint John Paul II Retreat Center, colored T-shirts hung on clotheslines, with each color representing a different form of trauma.

This visual display at the Camden Diocesan Prison Ministry Conference was part of an initiative called The Clothesline Project. Marsha Smith, a social worker at Camden County Correctional Facility and director of the Second Chance Program at the jail, said the project “bears witness to those who are incarcerated and struggle to break free of the violence they have endured.”

This violence, she explained, is a critical component of their risk factors for incarceration and significantly impacts their recidivism.

When offered the opportunity to visually create a display with a message of their choosing in order to “break the silence,” pains from the past surfaced as dark as the ink scrawled across each T-shirt.

“I was left alone with my uncle, a monster,” read one. “No one believed me before,” read other.

Smith explained, “Many of these men and women have undergone trauma, and that must not be ignored because they are behind bars. Most have never told anyone about violence and trauma that they’ve faced, but you can see it right across their faces. By giving them a chance to be heard, they are also confronting what they’ve endured, which is taking a step toward healing from their pasts and setting their sights on the future.”

Conference attendees silently made their way around the room, reading the message on each T-shirt. Not all of the messages were somber. “My struggle is not my identity, God is with me,” read one expression.

Statistics show a grim picture of the correlation between trauma, incarceration and recidivism. The prevalence of severe mental disorders, particularly post-traumatic stress disorder related to childhood trauma, are significantly higher in incarcerated individuals. And a Bureau of Justice Statistic study found that inmates released from state prisons have a five-year recidivism rate of 76.6%.