Over the course of the past few months, the nation’s eyes turned towards a series of relentless and devastating natural disasters pummeling the United States and its Southern territories.

But, with great destruction comes great relief efforts. As in past disasters, at the forefront of Hurricane Harvey’s and Irma’s disaster response are Catholic Charities agencies, led by Catholic Charities USA’s (CCUSA) – the official domestic relief agency of the U.S. Catholic Church.

To immediately help those affected by the devastating aftermath of these disasters, please prayerfully consider making a gift to Catholic Charities USA’s Disaster Relief Fund – the official domestic relief agency of the United States Catholic Church. These funds will provide direct assistance to the tens of thousands of individuals whose lives have been upturned by natural disasters. They will also enable Catholic Charities’ Disaster Recovery team to coordinate long-term case management and financial assistance to help individuals and families rebuild their lives.

In our own Camden Diocese, Catholic Charities staff will be deployed to assist in disaster relief efforts, as they have during past crises such as Hurricane Katrina and Hurricane Sandy. Needs will change, but the one need that is constant is monetary donations. In disasters such as this, experts agree that cash is preferred to donations of items such as clothing and blankets.  Donated funds can then be used to buy relief and recovery supplies locally, ensuring that the most appropriate and necessary supplies for the communities in need can be quickly obtained, and in turn, supporting local economies as well.

Other ways of donating:

These parents had all evacuated from their homes in Puerto Rico which were destroyed by Hurricane Maria in September. During this difficult time of transition for these families, Catholic Charities has been helping them with housing, employment, food, clothes, and utilities. The parents are working hard to make ends meet as they begin a new life after leaving everything behind. And this Christmas, they faced a new challenge: providing toys to their children for Christmas. Read the full story here. 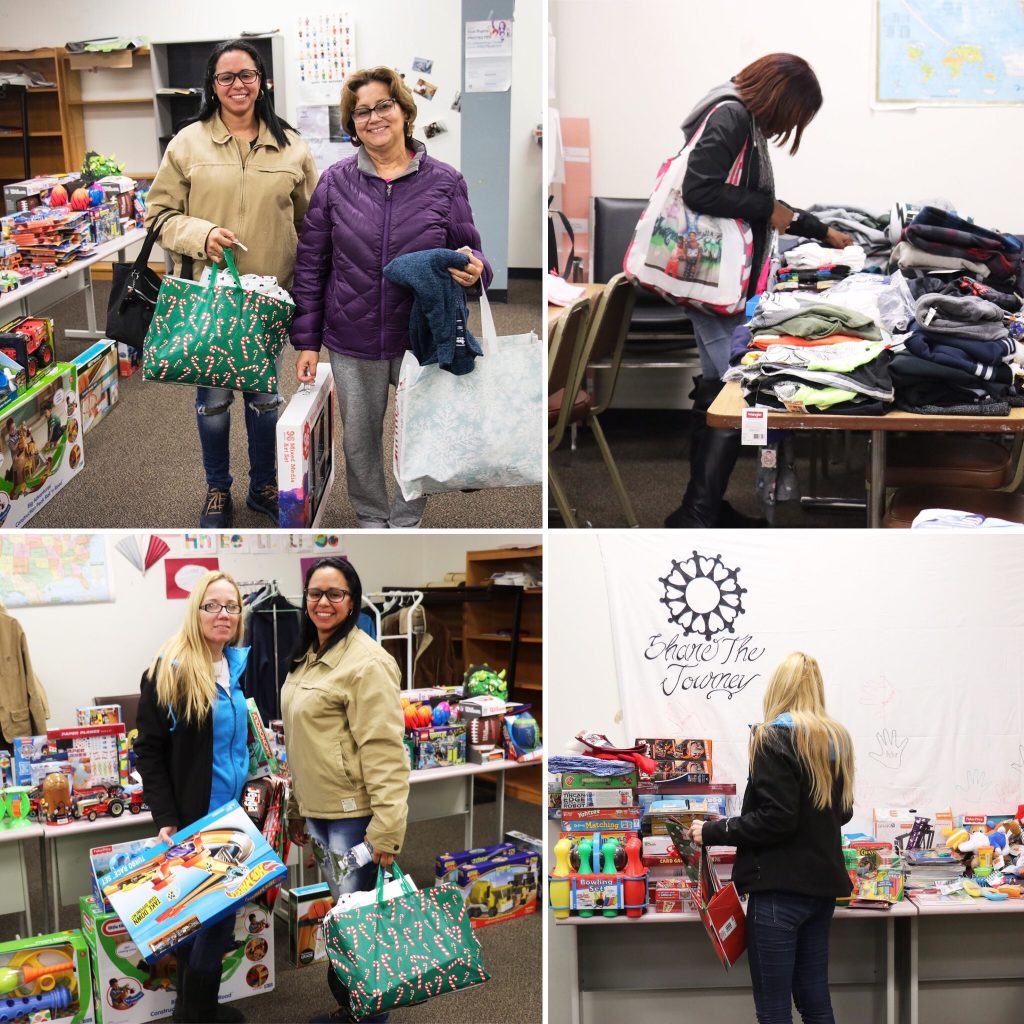 Shortly after returning from a two-week deployment in Houston, Jose Sanchez has again been deployed to assist in Puerto Rico relief efforts, where he provides hot meals to victims of Hurricane Maria, helps to get a donated power generator up and running, assesses damage, and provides disaster case management. 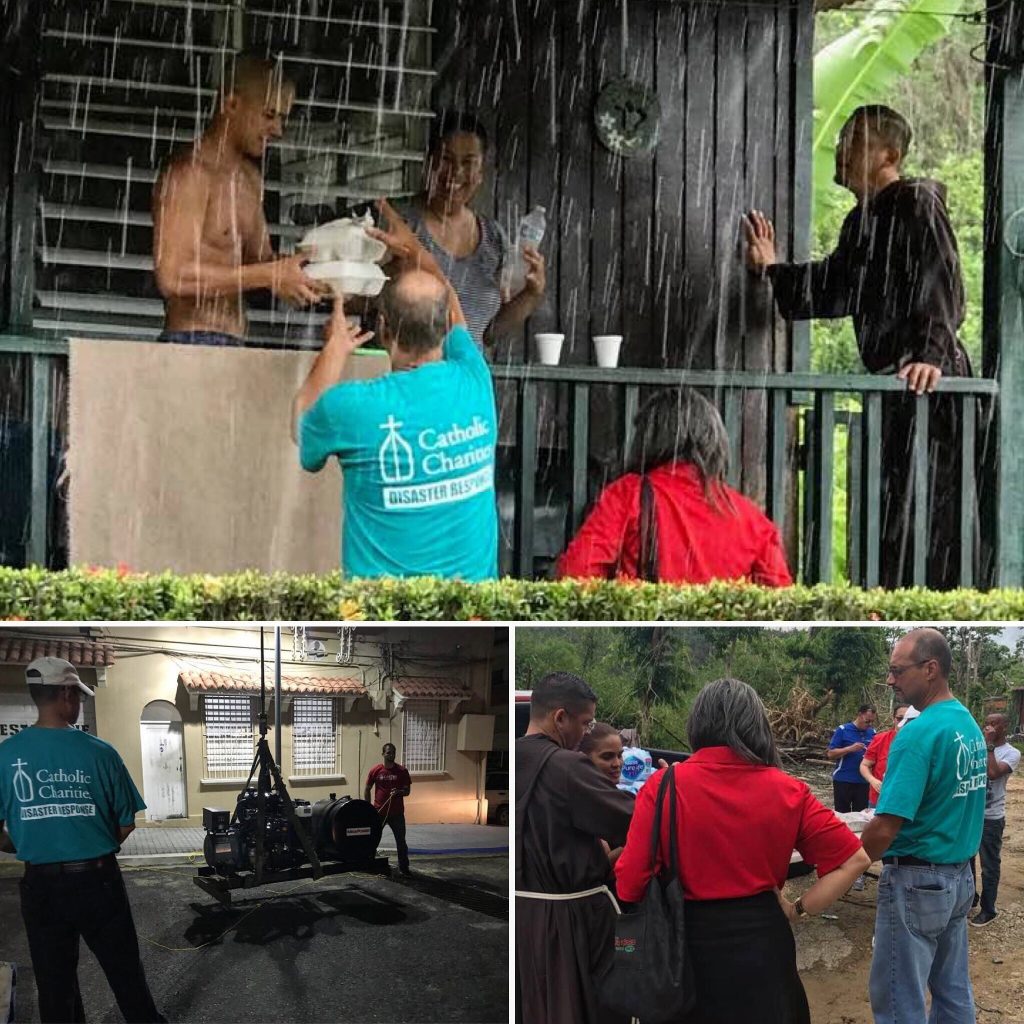 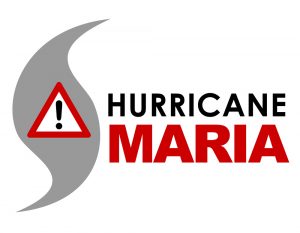 Our hotline number: 856-342-4073 or e-mail HurricaneMariaRelief@CamdenDiocese.org.

Checks can be mailed to CCUSA at:

Staff member Jeffery Kates prepares and loads MRE’s (Meals Ready to Eat) for victims of Hurricane Irma in Florida. Many farm workers who live in trailers have lost their homes, and most of the crops that were just planted were destroyed by the hurricane –  leaving the workers without work, food, or housing. Loading and packing boxes of food, Jeffrey Kates works to provide immediate disaster relief by ensuring that these victims are able to eat. 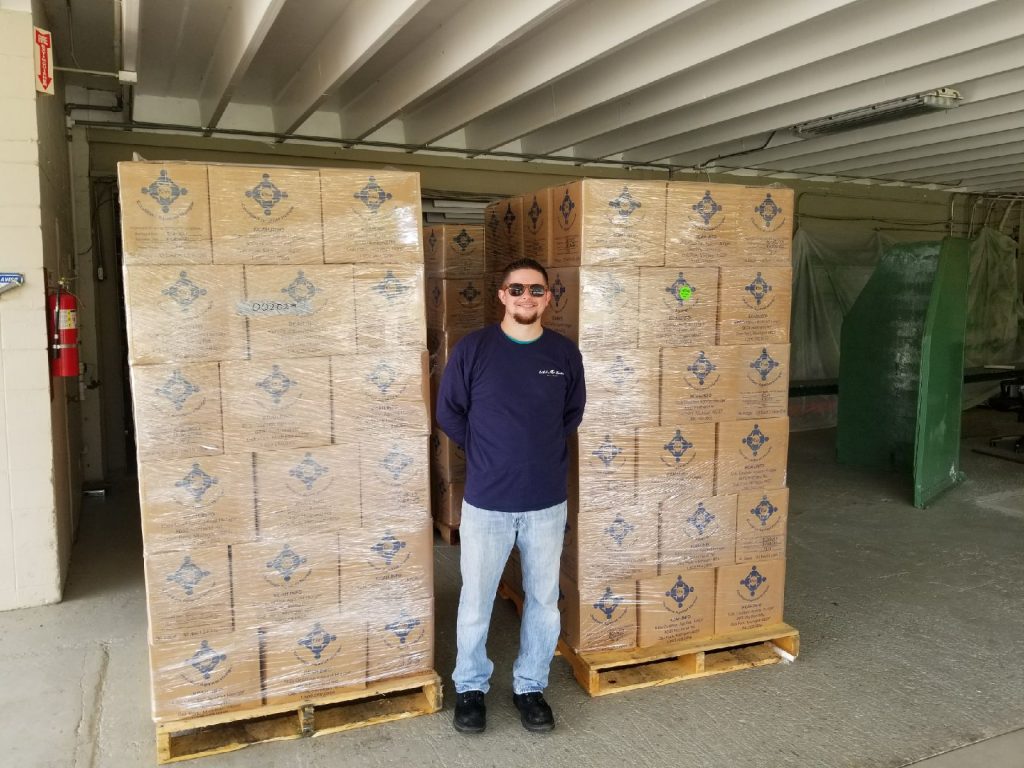 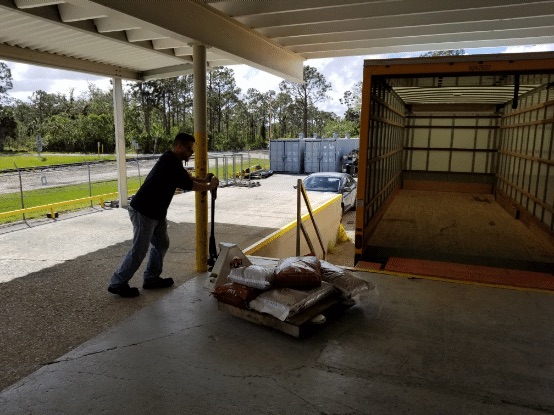 Each year in a different city, Catholic Charities agencies across the nation gather for an annual conference to participate in workshops and learn best practices to improve their services. For months, the 2017 was scheduled to be held in Houston.  Given the devastation inflicted by Hurricane Harvey, staff members who are currently in Houston for the gathering are busy providing disaster relief services to Hurricane Harvey victims. 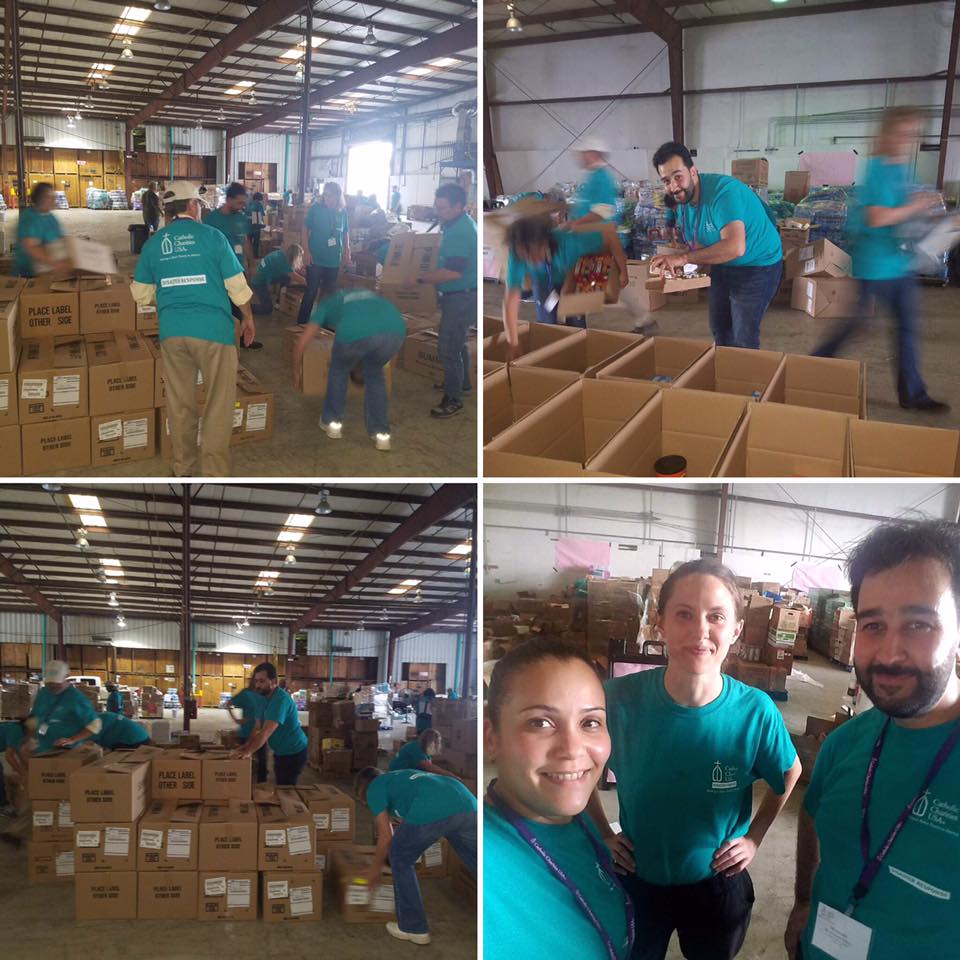 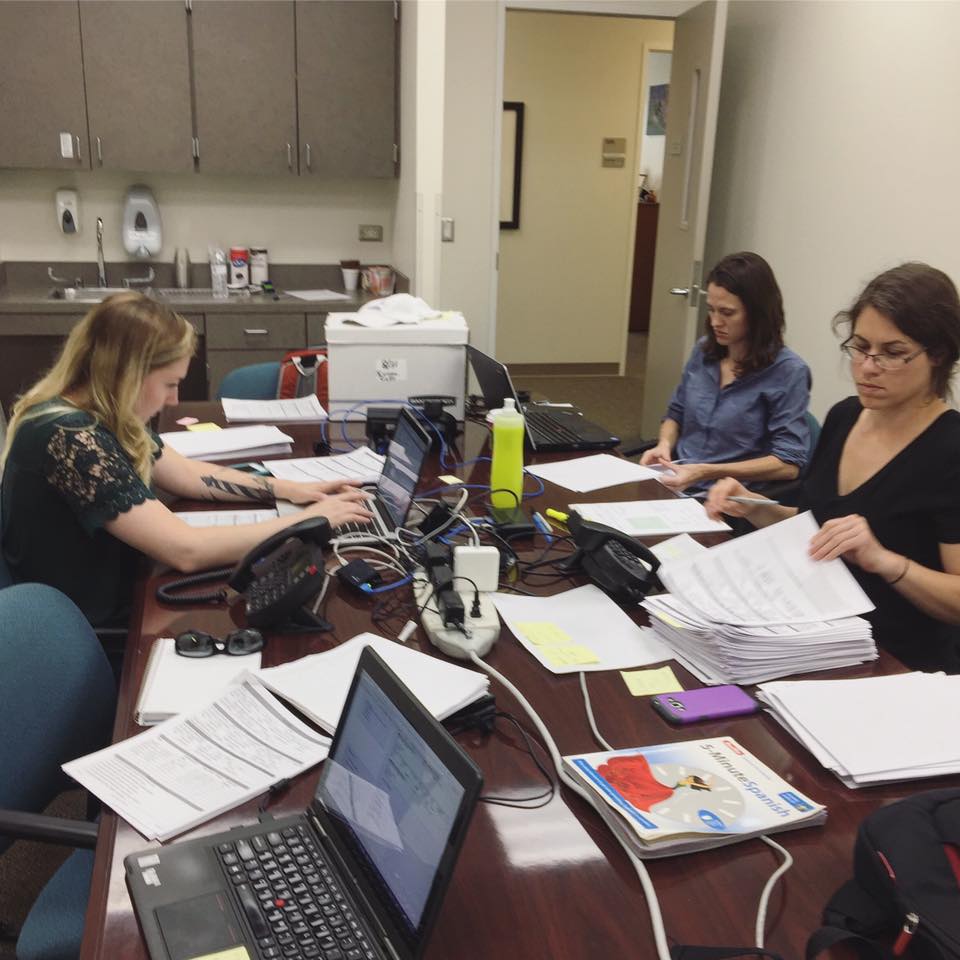 Beth Marshall (back right) works on the Coordinated Assessment Network database – a program that maintains a record of all individuals and families who were affected by the disaster. 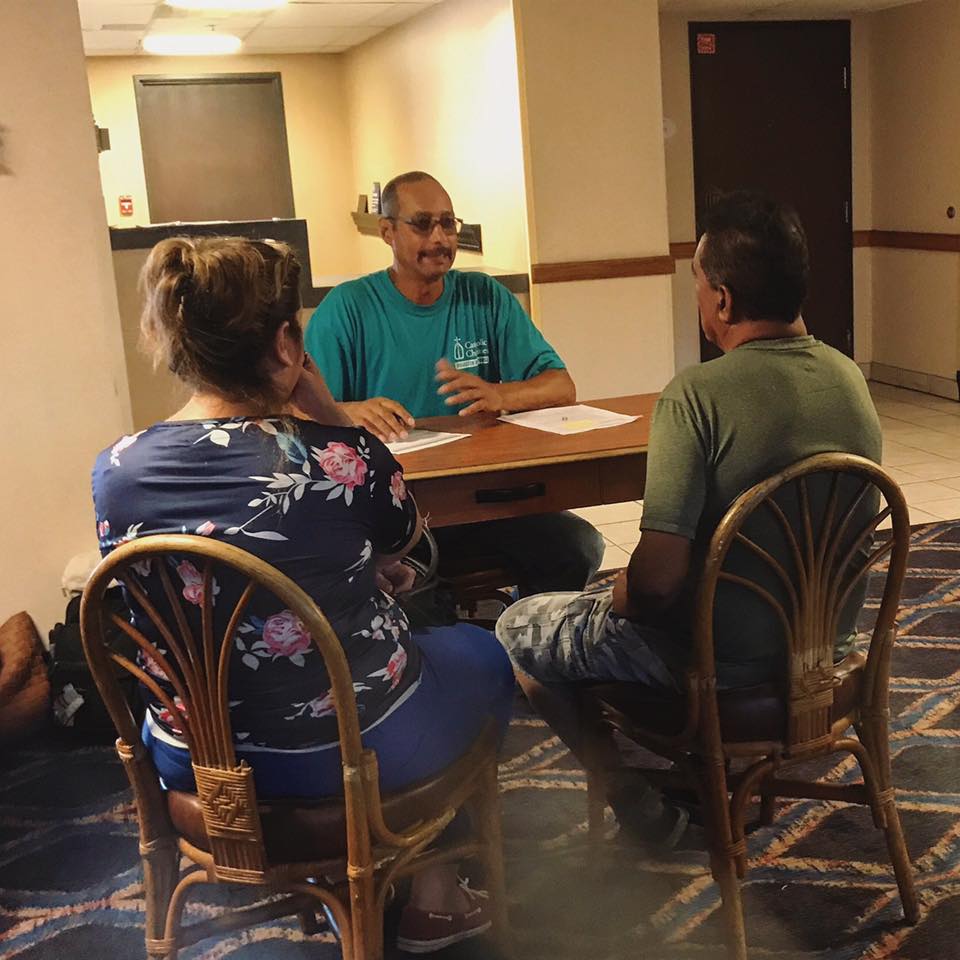 Today, Hurricane Maria made landfall in Puerto Rico as a high-end Category 4 hurricane with winds of 155 mph, becoming the strongest to hit the territory since the 1928, as well as the most intense hurricane to hit the territory in recorded history, and the most intense to make landfall anywhere in the United States since 1969. As Maria approached, people still recovering from Irma were again seeking shelter.

Catholic Charities Text-to-Give campaign is now also accepting donations for relief from Hurricane Maria in addition to Hurricanes Harvey and Irma. One hundred percent of donations is directed to Catholic Charities agencies in areas impacted by disasters to assist people with shelter, food, and other needs. To donate, text CCUSADISASTER to 71777 or click here. To donate by phone, please call 1-800-919-9338.

Aruna Malc uses her expertise as a Catholic Charities Case Manager and RN to provide both short-term and long-term assistance to victims of Hurricanes Harvey and Irma – screening applications for housing needs, conducting client intakes, organizing supplies, and helping clients in need of basic necessities at Catholic Charities of the Archdiocese of Galveston-Houston. 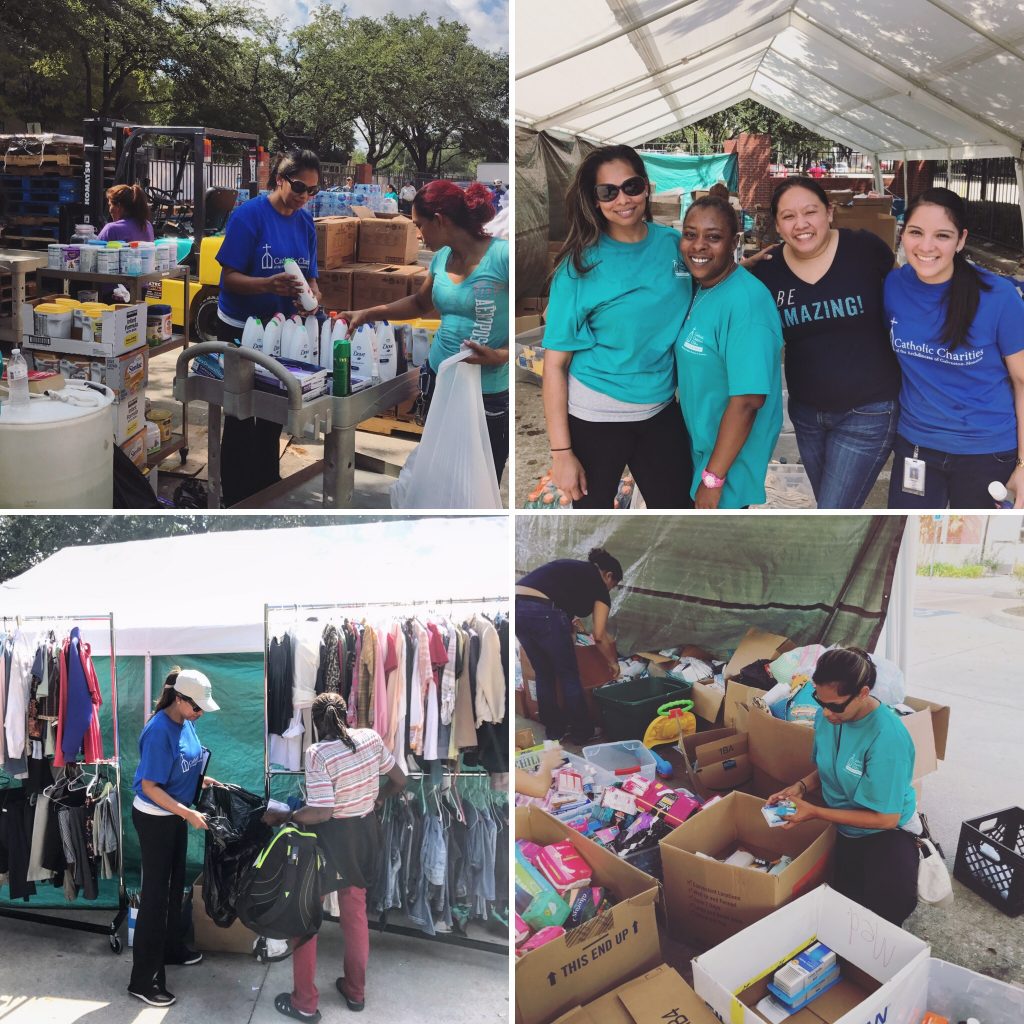 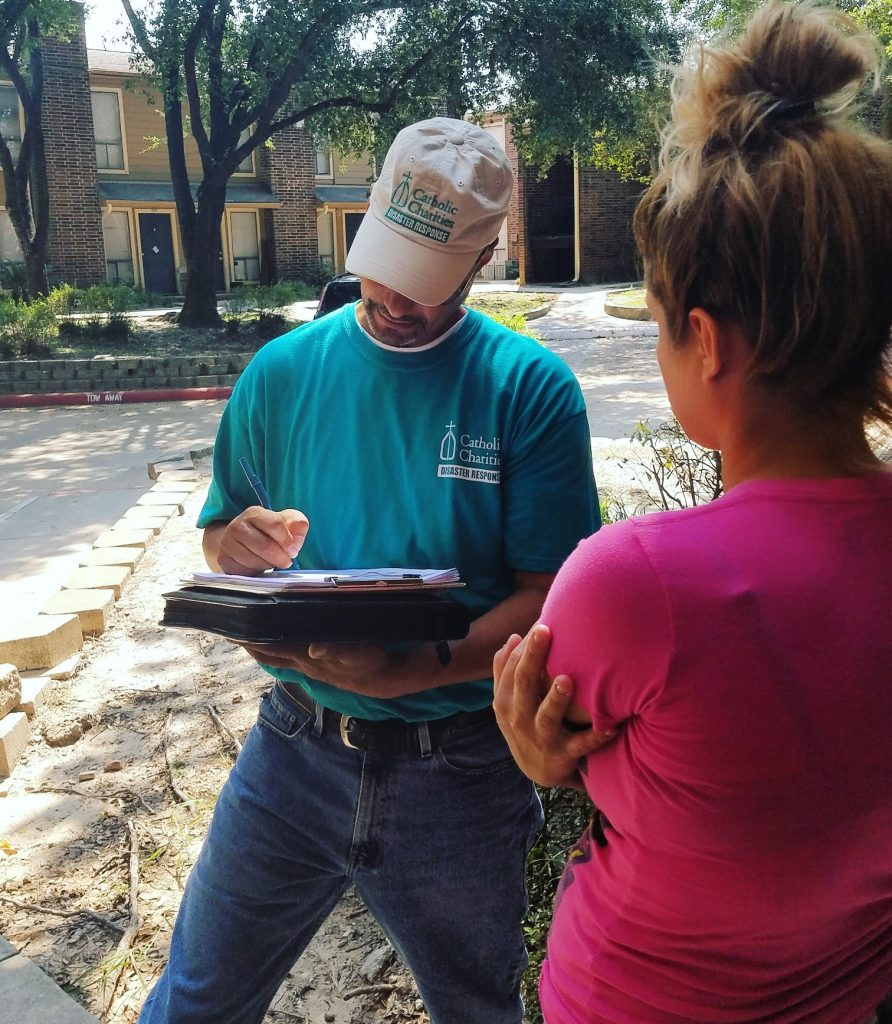 Jose Sanchez spends his first day of deployment surveying the need of residents from a flooded apartment building. Fluent in Spanish, he also works with undocumented individuals who don’t speak English. 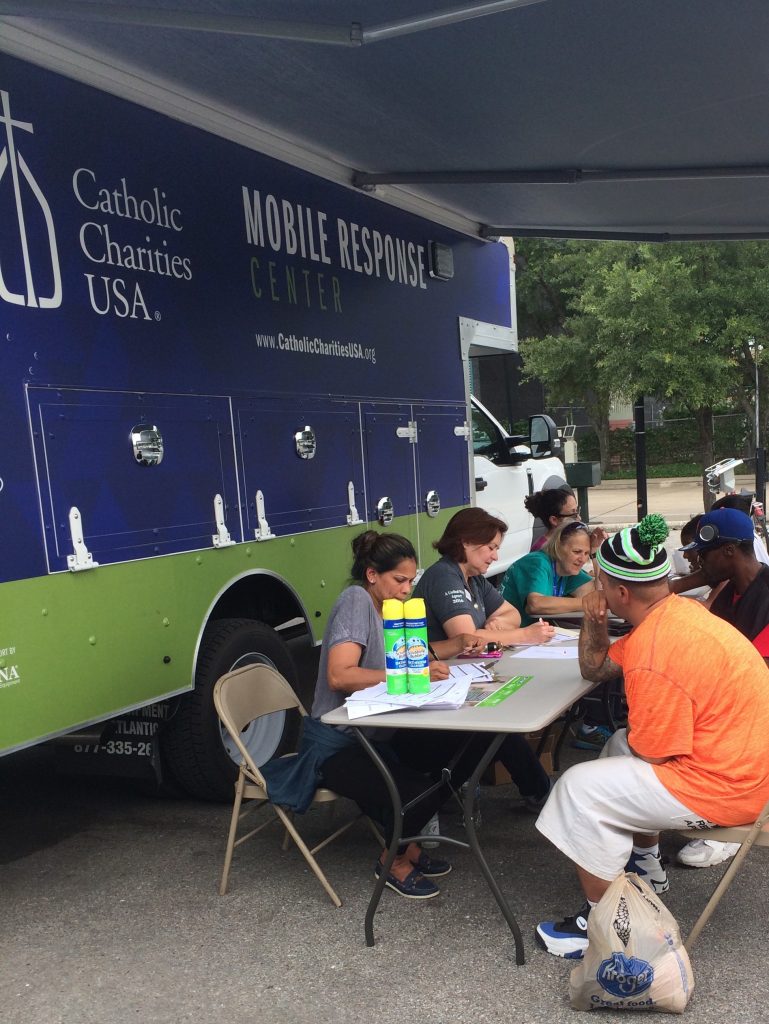 Two Catholic Charities employees from the Diocese of Camden – Jose Sanchez and Aruna Malc – have been deployed to affected areas in Texas. Read about Jose Sanchez and his previous experiences in disaster case management, as well as his perspectives as he responds to the current crises. Click here.

Catholic Charities Text-to-Give campaign is now also accepting donations for relief from Hurricane Irma and the possible impact of Hurricane Jose. One hundred percent of donations is directed to Catholic Charities agencies in areas impacted by disasters to assist people with shelter, food, and other needs. To donate, text CCUSADISASTER to 71777 or visit http://www.CatholicCharitiesUSA.org. To donate by phone, please call 1-800-919-9338. 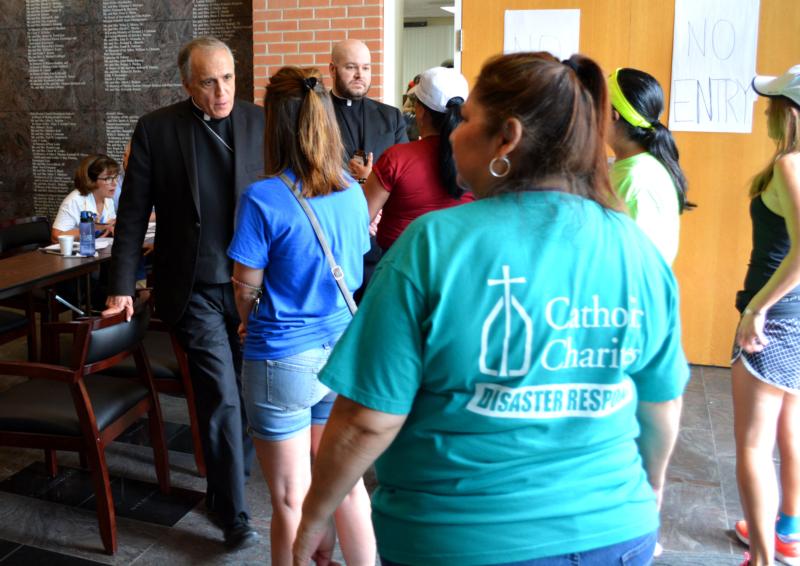 Diocesan Catholic Charities agencies have been hard at work in recovery efforts, trying to address difficulties as they arise.  Click here to read more about relief efforts.

Most Reverend Dennis J. Sullivan, Bishop of Camden, has issued the following statement in announcing an emergency collection to be conducted at all Masses in the Diocese of Camden. The collection on behalf of Hurricane Harvey will be held the weekend of September 2-3. 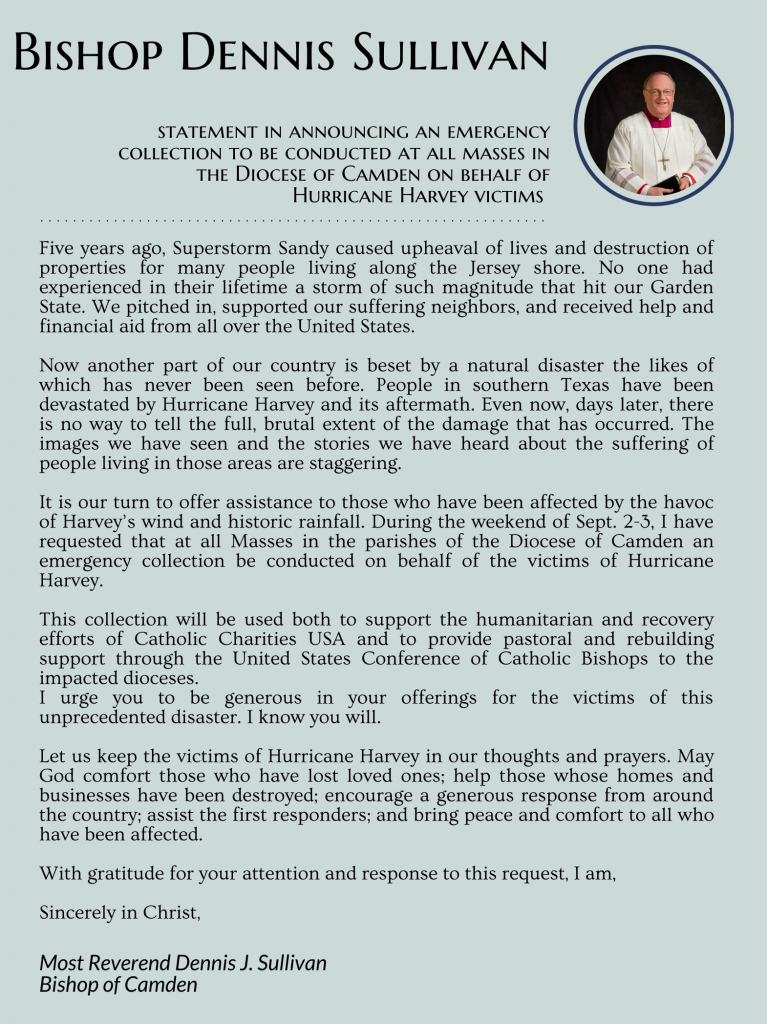