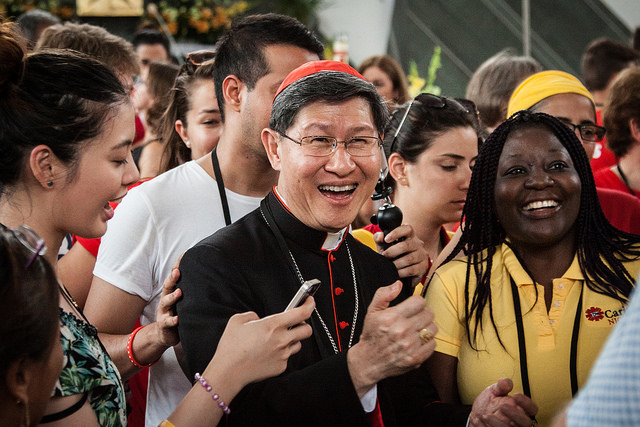 Catholic Charities, Diocese of Camden, will honor a figure whose words and actions are heard and felt around the globe, providing hope for the church and for people of all faiths: Cardinal Luis Antonio Tagle, Archbishop of Manila, Philippines, and the president of Caritas Internationalis.

Cardinal Tagle is an international advocate and driving force of justice and compassion for the most vulnerable and marginalized populations worldwide. He is the hand of help for the poor and suffering, a voice for the voiceless, and a face of welcome for the stranger.

It is this devotion toward living out Catholic social teaching that makes him a most appropriate figure to honor at Catholic Charities’ 16th Annual Justice for All Awards Dinner on Oct. 3 at Resorts Hotel in Atlantic City, according to Kevin Hickey, Catholic Charities’ executive director.

“The universal church has frequently relied upon the talents, competence and leadership of Cardinal Tagle, who has planted thousands of actions of love across the world,” he said, pointing to the cardinal’s management and leadership of various charitable and humanitarian activities around the globe.

Cardinal Tagle was the first Asian to head Caritas Internationalis — a confederation of global Catholic organizations — and the second youngest person to be named a cardinal. Standing at the helm of Caritas, Cardinal Tagle brings synergy and harmony to this network of over 160 Catholic organizations that work at the grassroots level in almost every country of the world, providing emergency relief, community development and social services to all in need regardless of race or religion.

As president of Caritas, Cardinal Tagle drives the mission of this confederation to build a “civilization of love,” a better world for all, especially “the leasts.” These include refugees displaced from their homes because of war or disaster, those suffering from hunger and homelessness, victims of human trafficking and abuse, the sick with no medical care especially those suffering from HIV, TB and other  diseases, and those traumatized from the violence of war and civil unrest.

Hickey noted the leadership and guidance that Cardinal Tagle has provided throughout the two-year papal Share the Journey campaign, launched in 2017, which developed a culture of personal encounter with migrants and aimed to give a human face to the phenomenon of migration.

“Cardinal Tagle has observed that, ‘we need cultural intelligence for the sake of the Gospel and Humanity.’… The Diocese of Camden’s ongoing Share the Journey border pilgrimages and other events that reach the migrant community are animated and informed by that observation,” said Hickey.

“His commitment to the church’s mission of promoting human dignity and spreading the Gospel, feeding both the physical and spiritual hunger of those in need … it is what makes him most deserving to be honored with  the 2019 Saint John Neumann award.”

In addition, the dinner will honor a number of Disciples of Mercy who, through their commitment to showing acts of mercy, are making a difference in the lives of the poor and the disenfranchised locally in South Jersey. Over the years, a wide variety of individuals and small ministries have been honored for their work. This year, one person or small group per deanery will be honored, with the aim of recognizing those who serve as “unsung heroes” of the diocese. These awardees will be honored alongside Cardinal Tagle during the Justice for All Awards Dinner.

Since the dinner’s inception in 2004, more than $1 million have been raised, every penny of which is used for direct client assistance for those served by Catholic Charities, those who live on the margins and struggle with the stress of poverty every day. These vulnerable populations include veterans, the homeless, the unemployed, families facing eviction or other housing crises, and those who suffer from mental illness, addiction and other ailments.

“This event helps to sow hope for more than 34,000 individuals yearly for direct client services in Southern New Jersey, regardless of their religion,” said Kevin Hickey. “And while the dinner serves as a fundraiser, the honorees serve as a crucial reminder to Catholic Charities, and to all, about how we should be carrying out our work as missionary disciples, both locally and on the peripheries.”

To learn more about the dinner, nominate a Disciple of Mercy, or to view ticket and sponsorships, visit: www.CatholicCharitiesCamden.org/JFA2019