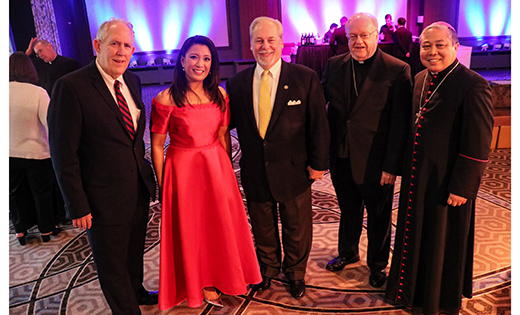 ATLANTIC CITY — When Bishop Dennis Sullivan addressed the more than 550 attendees at Catholic Charities’ 2019 Justice for All Dinner at Resorts Hotel here on Oct. 3, he pointed to two initiatives that are highlighted by the annual fundraising event.

Pictured at the Justice for All Awards Dinner Oct. 3 at Resorts Hotel, Atlantic City, are, from left, Kevin Hickey, executive director, Catholic Charities, Diocese of Camden; Elaine Quijano, CBS news and Justice for All emcee; Edward O’Malley, chair of the Justice for All Committee; Bishop Dennis Sullivan; and Archbishop Auza, Permanent Observer of the Holy See to the United Nations.

The first, he said, is Pope Francis’ call to “educate the faithful on how to become missionary disciples — to become Catholics who do not sit behind church walls and wait for people to come to us, but who go out to the peripheries to find people in need and to invite them to Christ’s table.”

In attendance were honorees who have devoted their lives to doing just that: journeying to the peripheries of society, out of their comfort zones, into their communities and even to other countries — all with the goal of encountering and serving the poor, the vulnerable and marginalized.

These honorees, recognized at the dinner as Disciples of Mercy, came from parishes throughout the Diocese of Camden. They have faithfully carried out initiatives on the local, national and international levels.

The honorees and their work were announced by Elaine Quijano, anchor of the CBS Sunday Evening News and the emcee of the event: 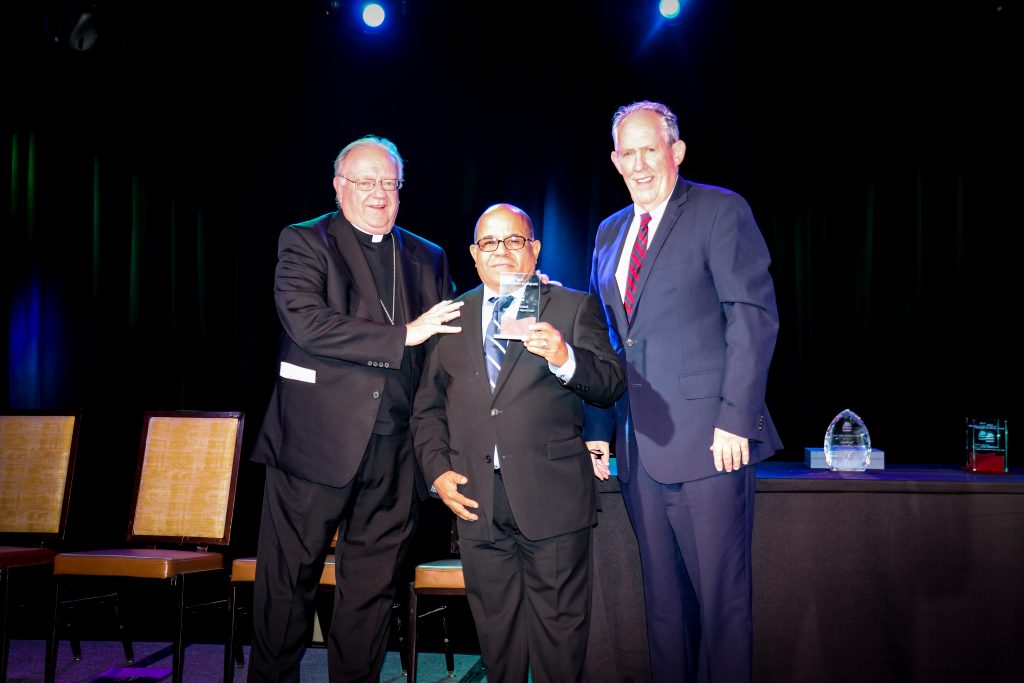 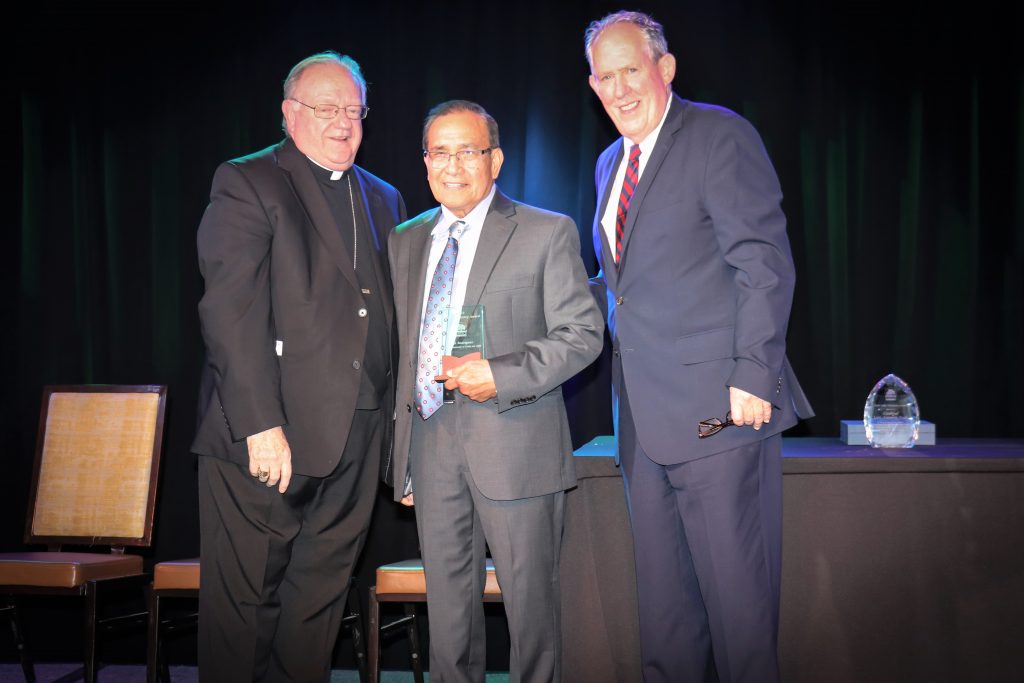 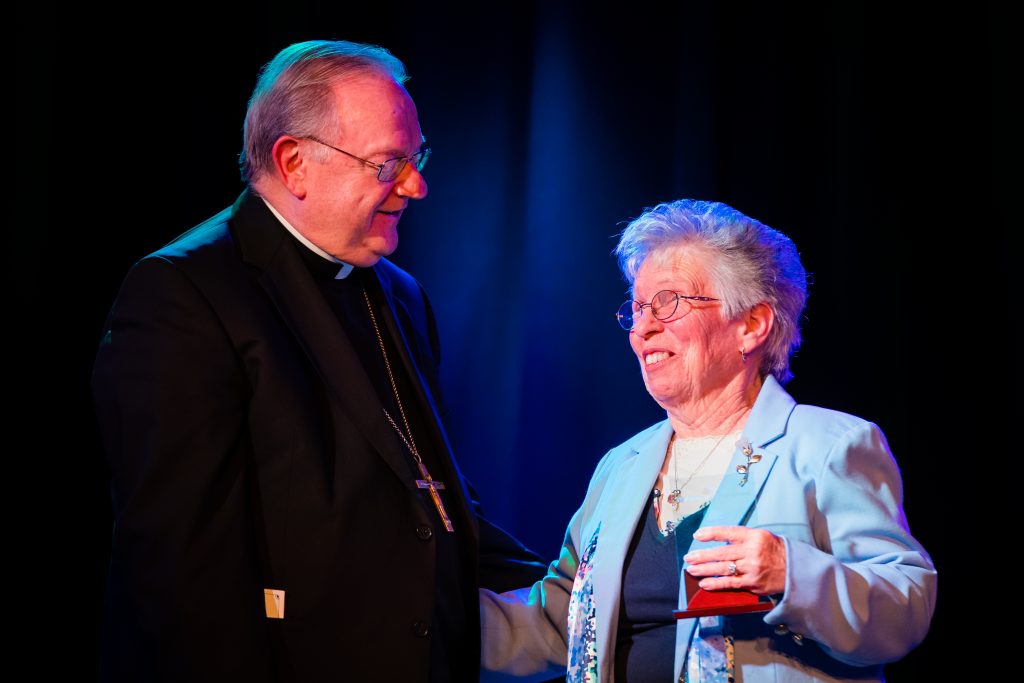 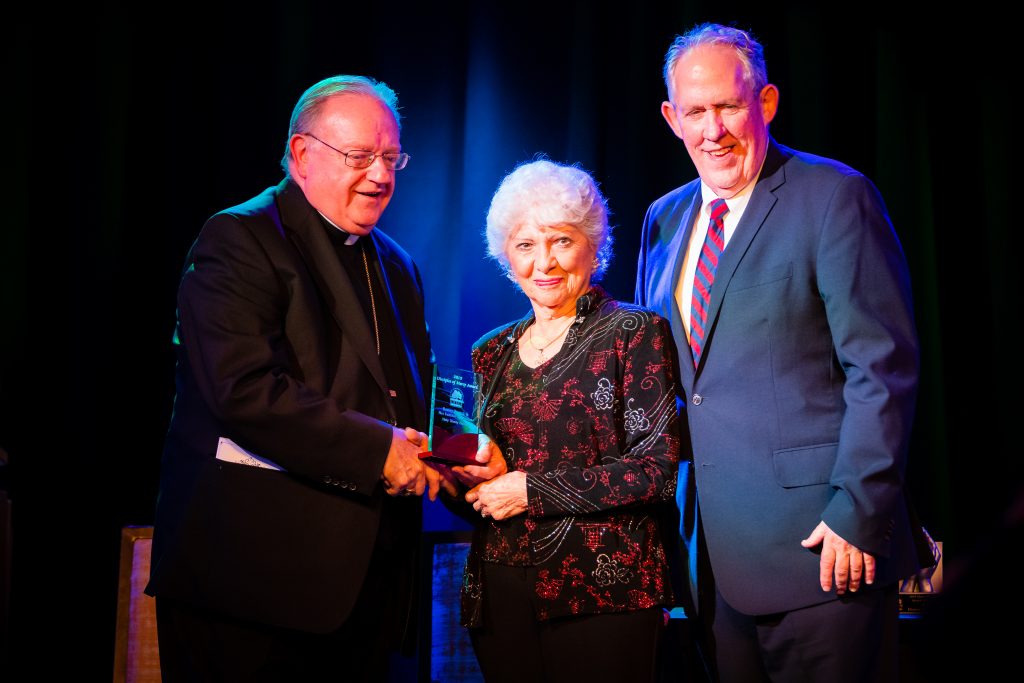 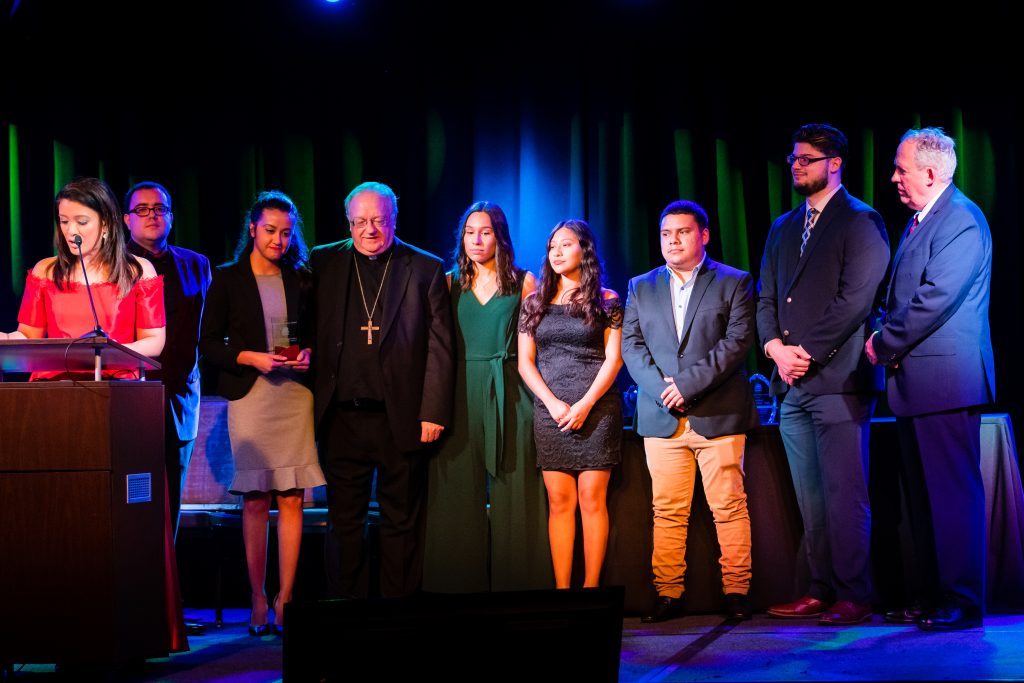 The second initiative Bishop Sullivan spoke about at the dinner was the Share the Journey campaign, a worldwide initiative specifically focused on the plight of immigrants and refugees. “At its core,” he said, “this campaign is very much an extension of missionary discipleship. Pope Francis knows well that immigrants and refugees are often faced with dire conditions, both in their home country and in their move to a better life elsewhere.”

In the final year of the two-year Share the Journey campaign, a “Share the Journey Award of Excellence” was given to three women religious for their efforts to support and bring awareness to migrant communities: Sister Dianna Higgins, FMLJ; Sister Maria Di Rosa, FMLJ; and Sister Maria De Jesus Herrera, MDPVM. Each played a vital role in gathering pilgrims to visit the Texas/Mexico border as part of Catholic Charities, Diocese of Camden Share the Journey pilgrimages. 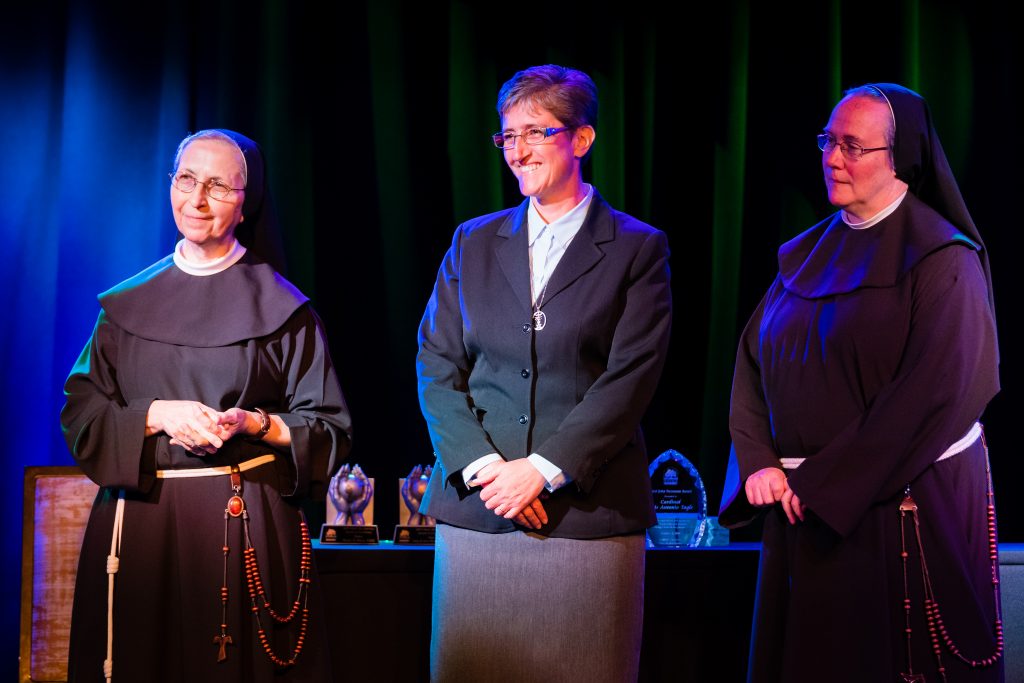 Finally, Bishop Sullivan introduced the evening’s main honoree and recipient of the Saint John Neumann Award, Cardinal Luis Antonio Tagle, Archbishop of Manila, Philippines, and president of Caritas Internationalis, noting his international leadership in his care for the vulnerable and concern for the millions of refugees worldwide. Cardinal Tagle addressed the audience through a video, as he was summoned to the Vatican for a consistory and therefore unable to attend the dinner.

“I would like to thank you for this opportunity for me to be one with you in our common mission, and I gladly accept this award, not in my own name, but on behalf of all those who are Sharing the Journey — our brothers and sisters who are forced to leave their homelands because of violence, climate change, and who end up being victims of human trafficking, new forms of slavery, simply because humanitarian assistance and welcome are not open or extended to them,” he said. 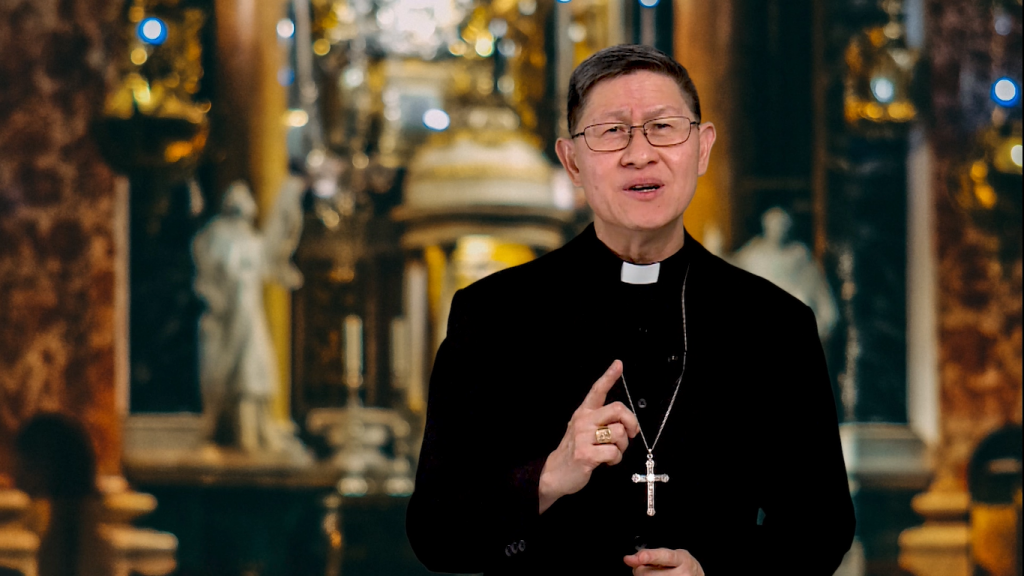 Cardinal Luis Antonio Tagle, Archbishop of Manila, Philippines, and president of Caritas Internationalis addressed the audience through a video, as he was summoned to the Vatican for a consistory and therefore unable to attend the dinner.

“I thank you, Bishop Dennis and Catholic Charities, for your creative ways of sharing the journey,” he continued. “Thank you for helping build up this culture of human encounter. In our world today, strangers, especially refugees and forced migrants, are perceived with fear. … Sharing the journey means meeting them in person, hearing their stories, seeing their tears, touching their hands, and by listening to them — we discover a brother, a sister, and neighbor, even ourselves. … Your efforts are already a big contribution to humanize what is otherwise becoming a dehumanizing experience for vulnerable people, and for that I want to thank you. It is a small act, to encounter another person — an encounter, which in the words of Saint John, becomes communion with the Father and communion with Jesus Christ.”

As the cardinal’s remarks were met with sustained applause, his award was accepted by a long-time friend and colleague, Archbishop Bernardito C. Auza, the Permanent Observer of the Holy See to the United Nations. 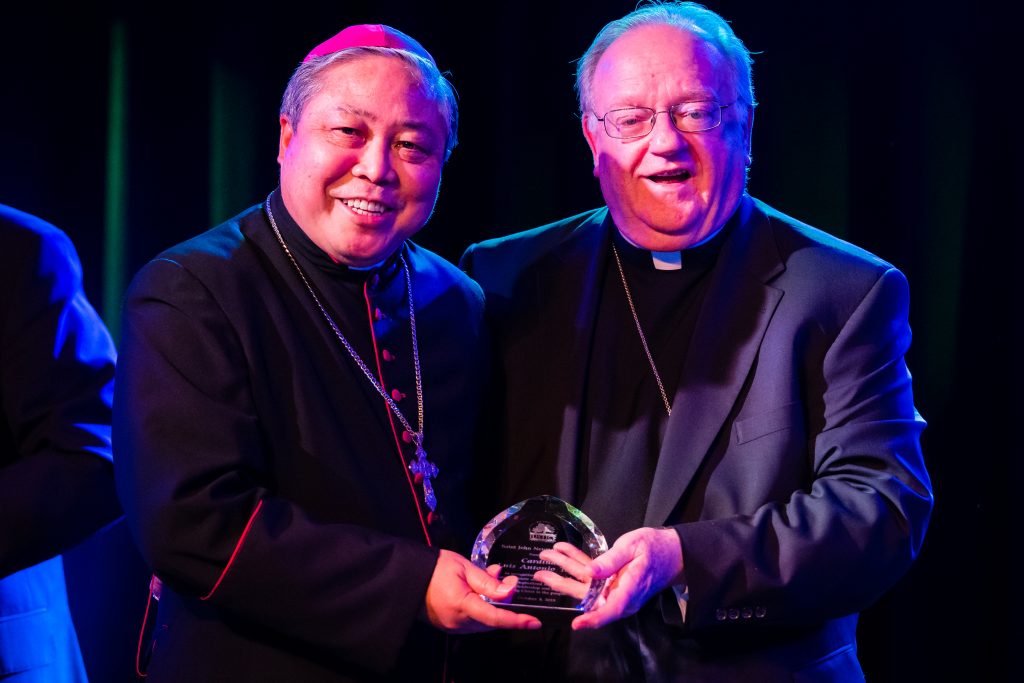 Offering testimony to both Bishop Sullivan and Cardinal Tagle’s shared sentiments about the importance of encounters, particularly with migrant populations, were two Catholic Charities staff members, Samantha Astley and Jose Sanchez, both of whom have led multiple pilgrimages to the U.S./Mexico border as part of the diocesan Share the Journey Solidarity Pilgrimages.

Astley shared a specific encounter she had with a 19-year-old mother who fled violence in her home country of Honduras in hopes of seeking a better and safer life. She gave birth during her three-month journey to the United States. “Her journey is just one of thousands,” Astley said. 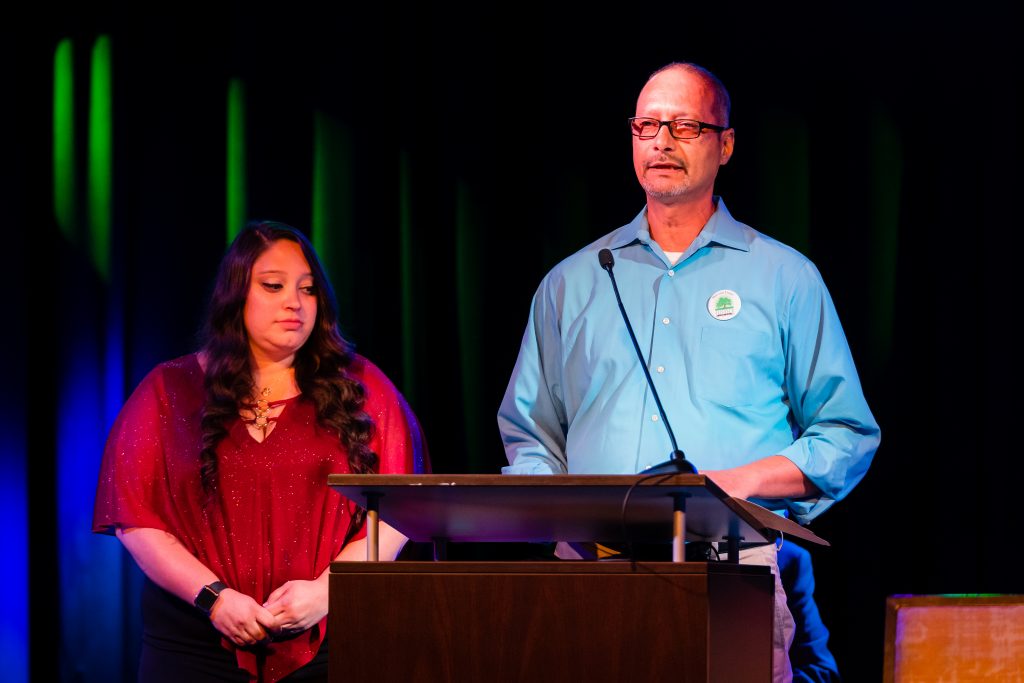 Added Sanchez, who also heard many stories from migrants as the border, “Sitting with them and hearing their stories … The brutality of the gangs on their sons, the corruption of their police departments and governments… Even worse, some families need to make the decision of which child they will bring on this refugee march. Which is strong enough to travel? Which is strong enough to stay behind? How do you choose who is strong enough to make the trip? All of these stories keep leading me back to one conclusion: For these refugees, anywhere is better than where they came from.”

This year, Catholic Charities saw the second-highest number of attendees since the dinner’s inception 16 years ago.

Offering thanks and praise to the event’s sponsors, honorees, planning committee and attendees was Kevin Hickey, executive director of Catholic Charities.

He said, motioning to the audience, “In 2018, Catholic Charities was able to have 43,652 encounters with those in need,” referencing the agency’s services provided, and reminding the audience that every penny raised from this annual dinner is used for direct client assistance. 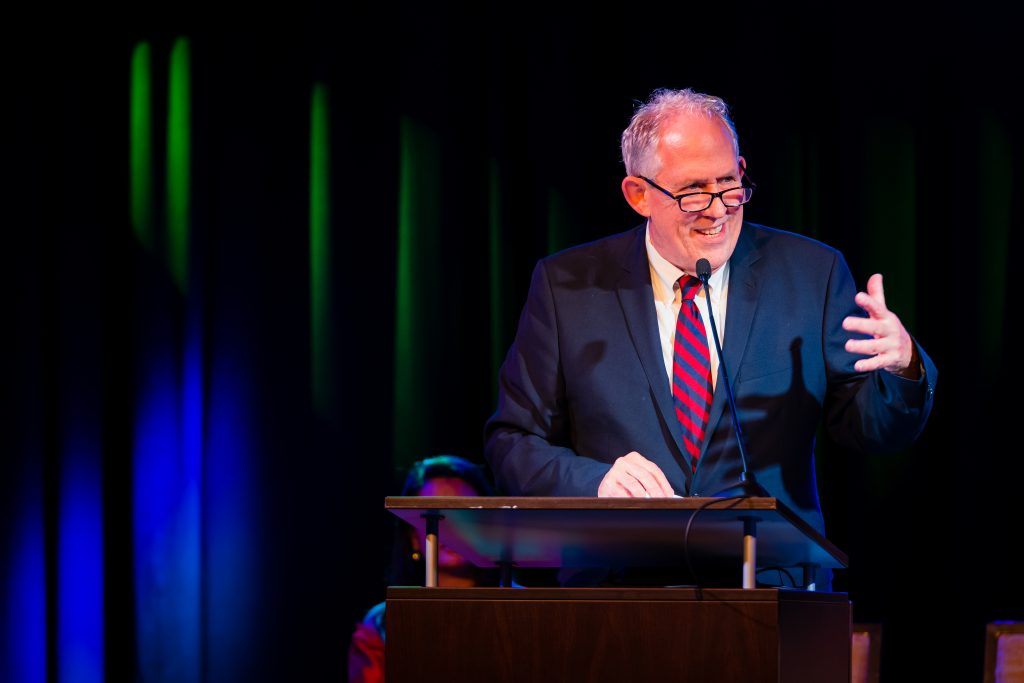 “Our Justice for All Dinner celebrates a continuous activity that we are all summoned to through Christ — keeping alive a climate of mercy and justice. Our honorees this year are manifestations of that actuality as they work to keep mercy, justice, hope and charity alive both in the six counties of the Camden Diocese and the wider horizons of God’s good earth and its people.”

With special thanks to our 2019 Justice for All Sponsors: