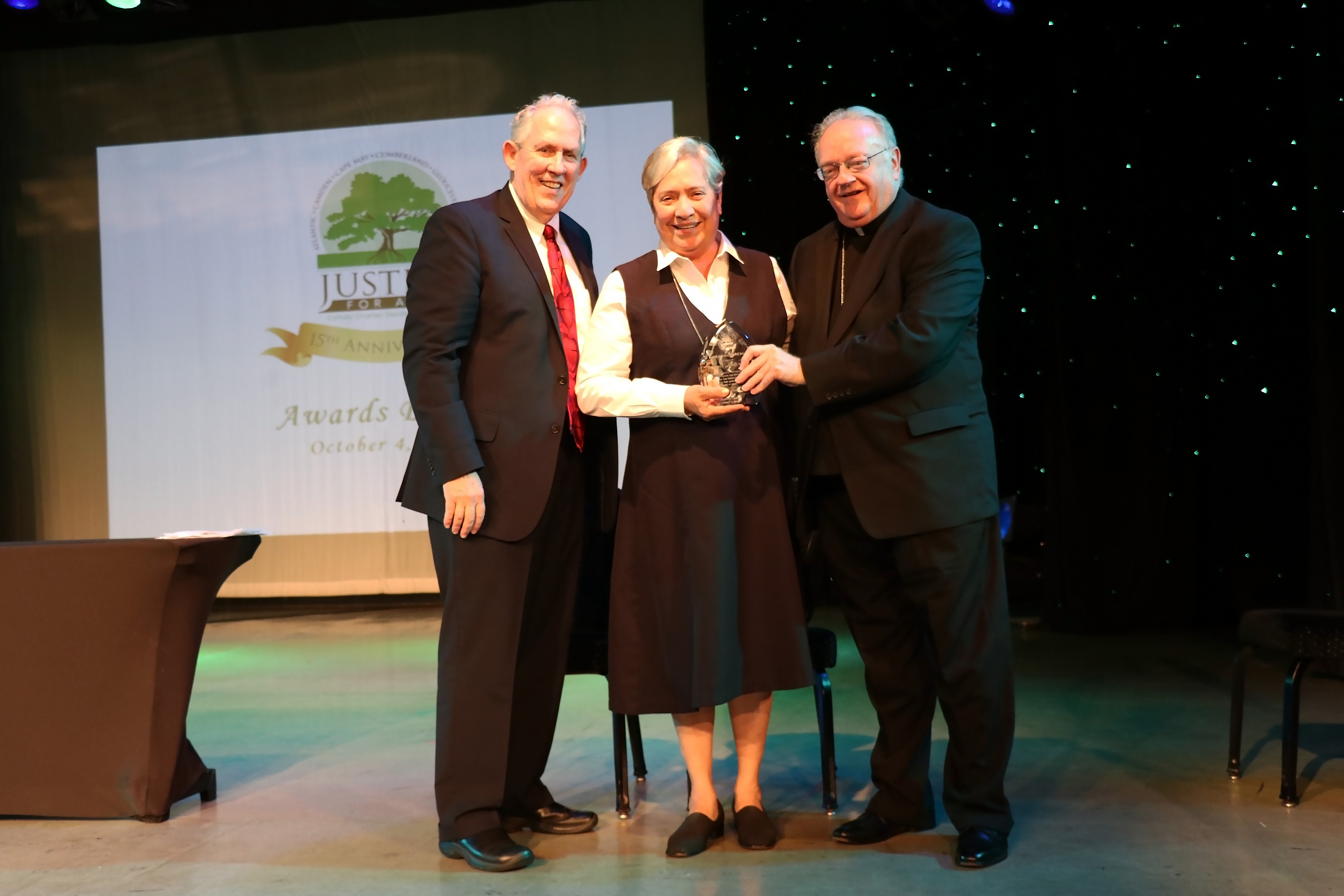 ATLANTIC CITY — When Sister Norma Pimentel approached the microphone at Catholic Charities’ 15th Annual Justice for All Dinner on Oct. 4, silence fell across the theatre at Resorts Hotel.

She began by recounting her first experience of helping thousands of immigrant families from Nicaragua and El Salvador back in the 1980s who were escaping the violence of civil war.

“I was very young back then. But I remember the faces of the refugees. I remember their hands. … Every fingernail had been removed by those who tortured them in their country. They were refugees who were trying to escape violence. We saw these people every day, and they needed help. And I learned then that we can’t go running when things got tough. We must be able to say ‘yes’ … to defending life, to restoring dignity, to standing up for justice for those people who are voiceless. We have that opportunity, and it’s up to us.” 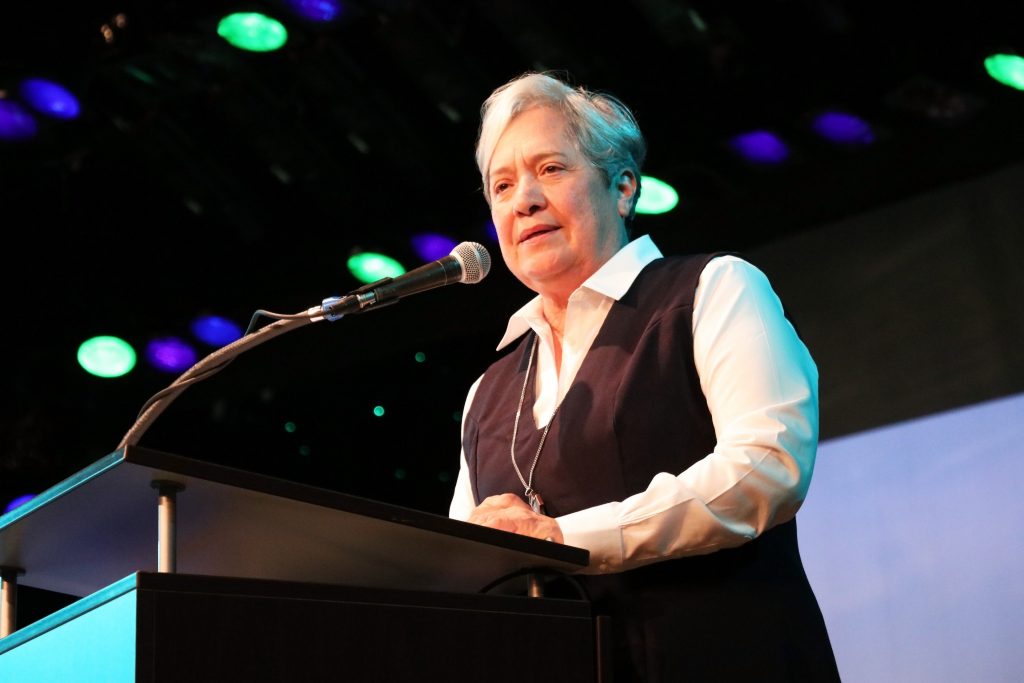 Her work with immigrants continued and in 2014, when the U.S. saw a major influx of refugees from Central America, she set up a respite center for care for these migrants after long and dangerous journeys. The center has cared for more than 100,000 individuals since 2014.

“These people come to us — families, children, babies, hundreds of them … and they are dirty, hungry and so scared. And those images of children pierced me so profoundly. They still do. It made it very clear to me what my mission was … to help them, to welcome them, to show them that we care, to show the world what we are called to do,” said Sister Norma, a member of the Missionaries of Jesus.

“We must share the gifts that God has given us with them, and all they are asking for is an opportunity for life, to be here in a place that is safe,” she said. “It all depends on us saying ‘yes,’ stepping forward, overcoming the fears that we have to do his work. And doing all of that in the name of God.”

Having served as the executive director of Catholic Charities of the Rio Grande Valley for the past 11 years, Sister Norma has provided humanitarian relief to over 100,000 migrants who have come to the country seeking a new and better life, free from violence.

Just one year ago, Pope Francis stood in Saint Peter’s Square at the Vatican, addressing an audience of thousands who had gathered there from all over the world to be part of a historical day for the Catholic Church — the launching of the “Share the Journey” campaign. Accompanying him was Sister Norma.

“Share the Journey” is a two-year campaign sponsored by Caritas Internationalis, the global network of national Catholic charities — including the U.S. Catholic Relief Services and Catholic Charities USA — to promote encounters with people fleeing persecution and violence.

The audience of over 400 at the Justice for All Dinner included 50 members of the Diocese of Camden who directly responded to this call to encounter by participating in solidarity pilgrimages to the Texas-Mexico border over the past eight months, where they had the opportunity to meet Sister Norma, learn from her and others living in the Rio Grande Valley, and care for newly arrived immigrants.

As Kevin Hickey, executive director of Catholic Charities, explained to the audience, the initiative was “created to give Catholics here in our diocese the opportunity to encounter migrants face-to-face … to see and learn about the complexities of migration, and share in their physical and emotional journey in the spirit of the ‘Share the Journey’ campaign.” 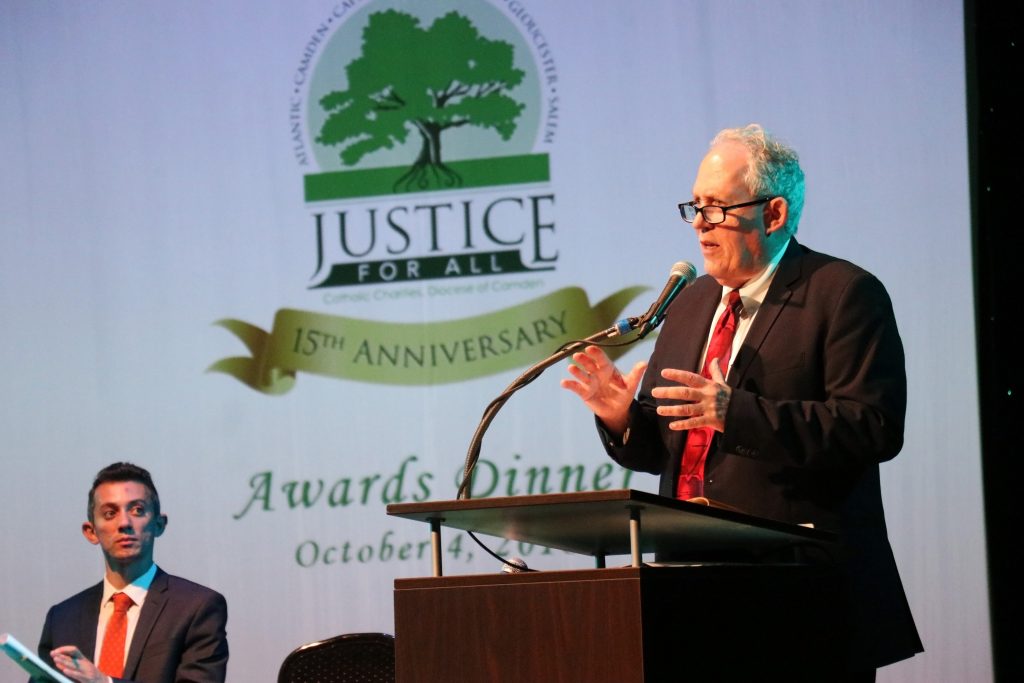 Hickey thanked Bishop Dennis Sullivan for his responsiveness and support of the initiative. “This would not have been possible without our bishop. The second I raised the idea to him of sending people down to the border, he immediately responded with ‘yes, let’s do it.’”

As Bishop Dennis Sullivan noted during his remarks, the decision needed no additional thought.”

“Of course we would send pilgrims. And not only to benefit Sister Norma and her immigrants in need. But to make sure our diocesan faithful understood what was happening in Texas. We needed people to see the real story with their own eyes. And then bring that perspective back to our neighbors and families. To know a situation, to really know it, we must be a part of it.” 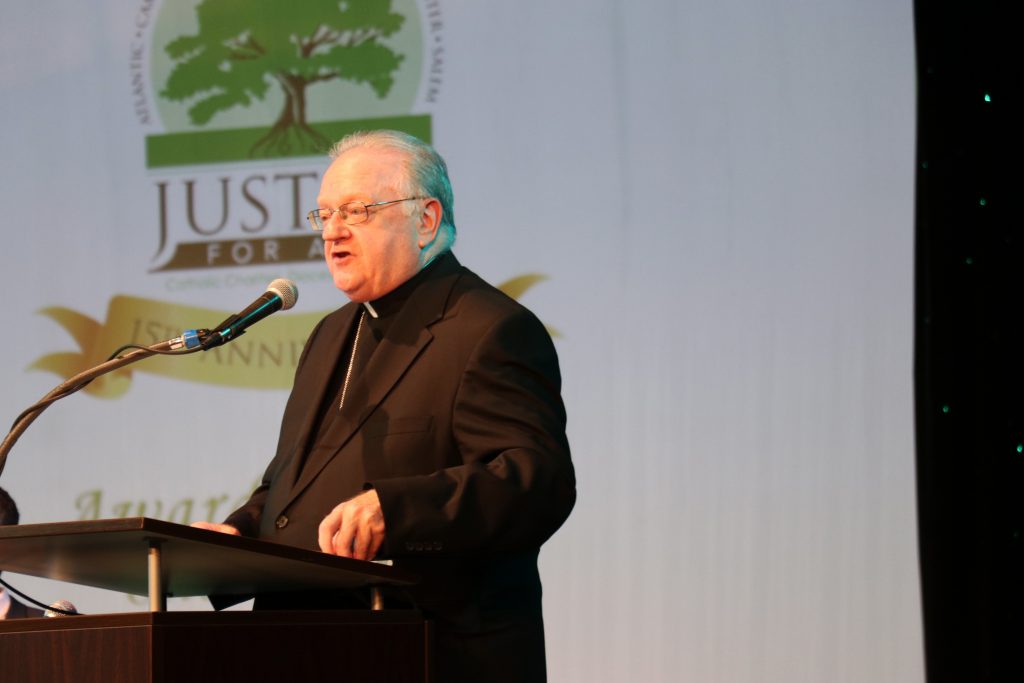 He continued, “There has been great public debate regarding refugees and immigrants entering our country. But for Catholic Charities, for their executive director Kevin Hickey, for the many case managers, for Sister Norma, and the hundreds of volunteers who have made the pilgrimage to her facility, there is no debate. This is what Christ calls us to do, to welcome the stranger. To assist those in trouble. To offer aid to the needy. To provide asylum to those fleeing violence and persecution. This is what Catholic Charities does and this is what we must all do as Christians. Not because the pope wishes it, or because I wish it, or because Sister Norma wishes it, but because God requires it of us.”

The evening continued with awards which were given to various individuals, groups and ministries in parishes throughout the diocese who have demonstrated outstanding commitment to serving those most in need on a local level in communities.

The night concluded with a standing ovation. As the night wound down, many parishioners greeted Sister Norma, embracing her, thanking her. One particular family in attendance — a mother and son who journeyed from Honduras — tearfully approached Sister Norma. Just two months prior, they had stayed in Sister Norma’s respite center after arriving in the country. They were then resettled through Catholic Charities and currently reside in New Jersey. With this re-encounter, the aspirations of Sister Norma Pimentel and the hopes and dreams of this newly-settled family found fulfillment. 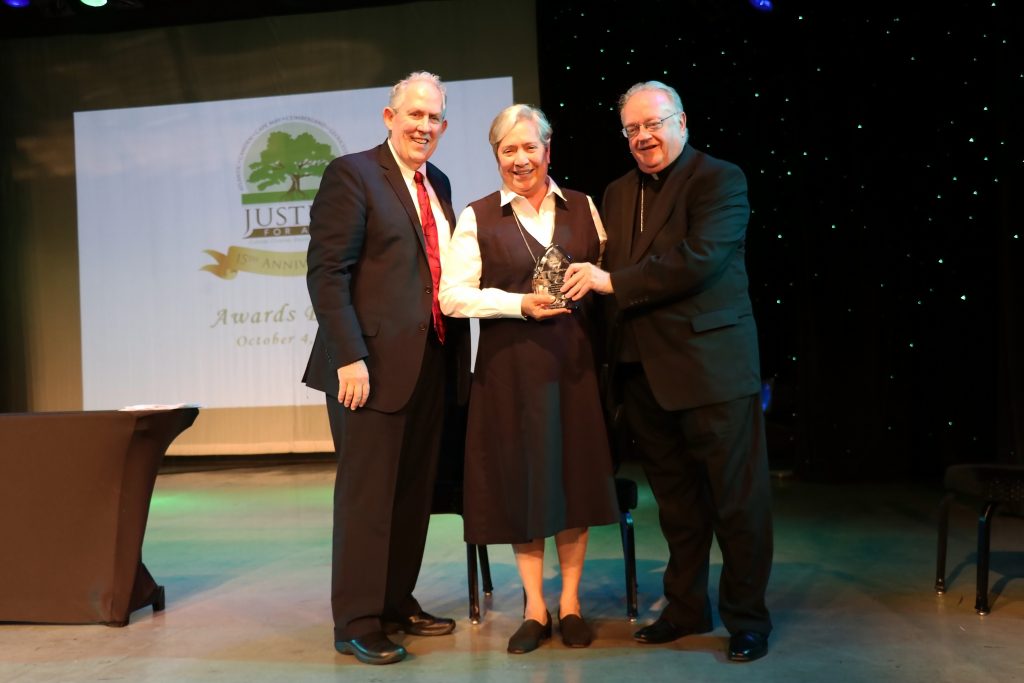 For the past 15 years, The Justice for All Awards Dinner has been the largest annual fundraiser for Catholic Charities. All money raised from the event is used to provide services to the poorest and most vulnerable individuals in the Camden Diocese, providing services to approximately 34,000 people a year. Catholic Charities and the Diocese of Camden thanks all sponsors, donors, honorees, and attendees that participated in this year’s event.