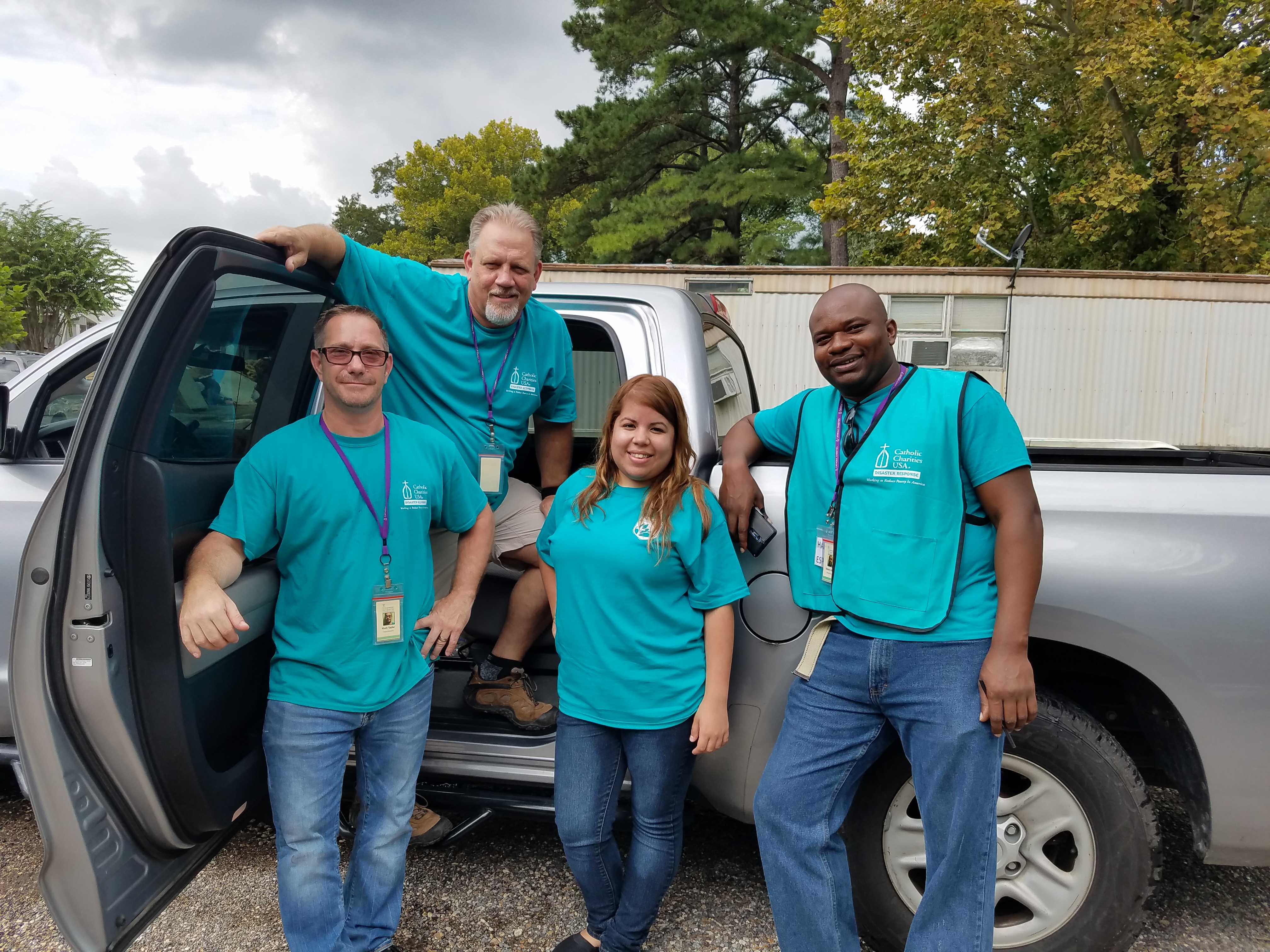 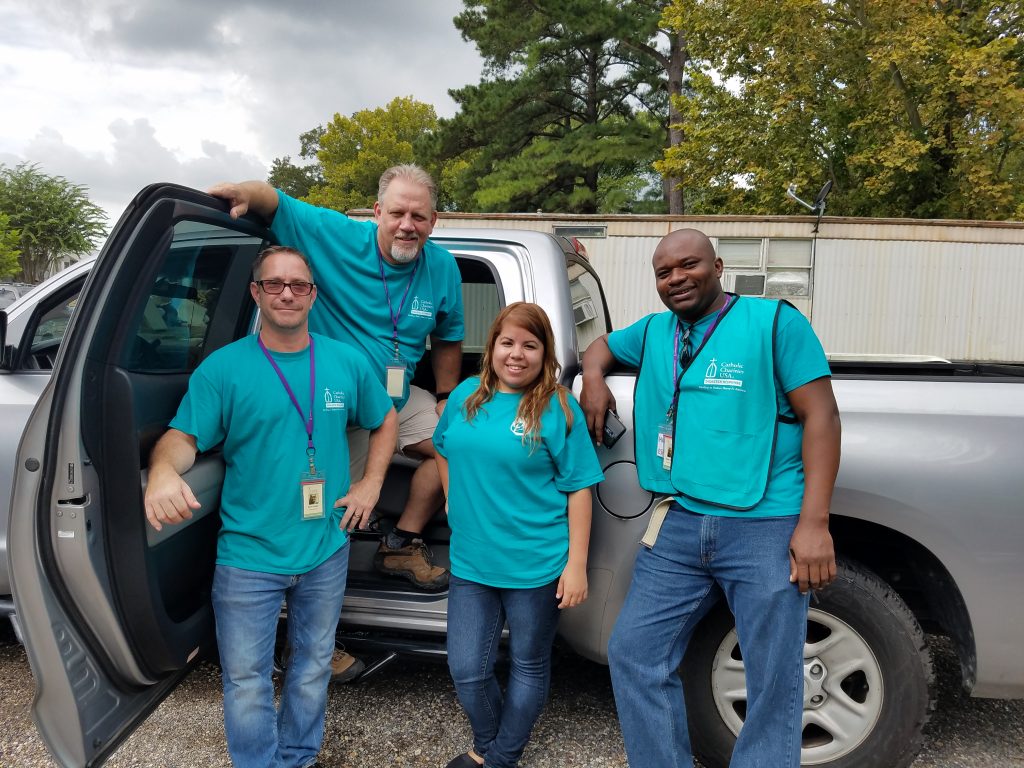 Mark Taylor, left, and Rohan Allen, right, both from Catholic Charities, Diocese of Camden, are helping out with relief efforts in Louisiana. Also pictured are Chip Leckway of Denver and Brissa Ladezma of Oklahoma City.

“It dumped the equivalent of 7.1 trillion gallons of water on the Baton Rouge area,” explained Mark Taylor, director of Veterans Services for Catholic Charities, Diocese of Camden, as he described the recent flooding that has devastated Southern Louisiana. “For comparison, Hurricane Katrina dumped about 2.3 trillion.”

Taylor, along with Rohan Allen, a disaster case manager with Catholic Charities, has spent the last two weeks deployed to Baton Rouge to assist in the recovery efforts following the natural disaster that hit the Bayou State on Aug. 11, spilling rainfall at rates of two to three inches for almost 48 hours, damaging or destroying more than 146,000 homes. 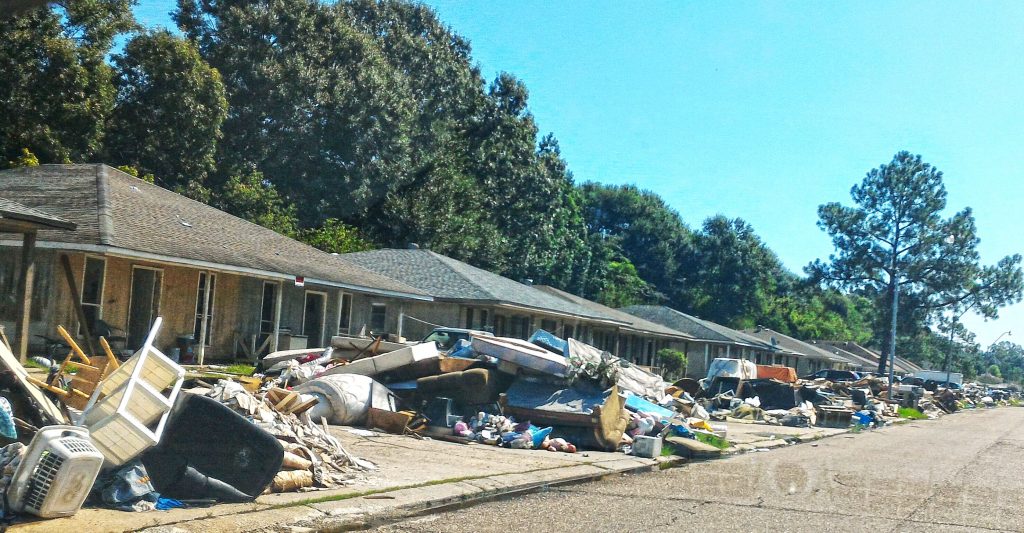 Debris is seen in front of flood-damaged homes after historic flooding in Louisiana last month. Two employees of Catholic Charities, Diocese of Camden, are helping in relief efforts.

Taylor and Allen spend their days working in warehouses, helping to organize, load and transport needed supplies to parishes and distribution sites around the Baton Rouge Diocese. They are also involved in long term recovery efforts, connecting individuals living in shelters with the right resources to begin the process of rebuilding their homes and their lives.

Allen, who is fluent in English, Spanish and Creole, has been a particular asset in the Hispanic community of Baton Rouge which took a devastating blow from the storm.

“Many of their neighborhoods and trailer parks were completely under water,” noted Allen. “They’re scared to reach out, and it’s been difficult for them to get good information and assistance.”

“Rohan’s knowledge and experience helped us jump start services to this vulnerable and overlooked population,” he said. “He went out with little direction or knowledge of our region and quickly developed relationships of trust and has helped hundreds of families begin their long process of recovery.”

Kevin Hickey, Executive Director at Catholic Charities, Diocese of Camden, commented, “As Bishop Sullivan noted, our Diocese and its Catholic Charities agency received an enormous amount of donations from across the country following Sandy.  That support enabled us to be active, present, and effective in both the immediate aftermath of Sandy, and for the past four years to thousands of residents in our Diocese,” he explained.   “We have developed great talents and knowledge in responding to disasters, and I am grateful to Mark and Rohan for sharing our collective knowledge and experience, and themselves with the people of Baton Rouge.”

Both Taylor and Allen are no strangers to emergency response. Taylor has had extensive training and experience including serving as agency lead for disaster relief following Hurricane Sandy that involved a month-long deployment to Sayreville, New Jersey. He has also been deployed to Catholic Charities in Denver in October 2013 when major flooding and rainfall from mountains wiped out several towns.

Allen has had over three years of experience in disaster case management work and was involved in securing help for Sandy-affected households as well. He also deployed to Catholic Charities in Houston after severe flooding that occurred in that region in 2015.

Taylor and Allen have been staying at the Bishop Robert E Tracy Center, a retreat center that is owned by the Diocese of Baton Rouge, where they were warmly welcomed by the Catholic Charities of Baton Rouge staff.

The need for Catholic Charities agencies from all across the country to mobilize for their affiliate organization in Louisiana is clear, Aguillard explained. “I regret that the scope of our August flood has been such that many of our resource organizations and concerned Catholic partners were themselves victims in need of assistance. Nearly all of our community’s response infrastructure was impacted, as was practically everyone in our own agency.”

Taylor spoke of helping a Catholic Charities employee gut his house that had been under five feet of water.

“It was a sobering day of assisting him throw most of his belongings out to the curb,” Taylor said. “Yet, as our work often does, it served as a reminder of how much we have to be grateful for back home.”

Bishop Dennis Sullivan has asked all parishes within the Diocese of Camden to take up a special collection for the Louisiana flood victims on the weekend of September 24-25.

“We here in New Jersey have been the beneficiaries of such aid in the past, especially in the after effects of Super Storm Sandy. Therefore, I urge parishioners, who are always most generous, to assist in these relief efforts for Louisiana.”

Remittance should be made to “The Bishop’s Office” with a note on the memo line stating “Louisiana Flood Relief.”