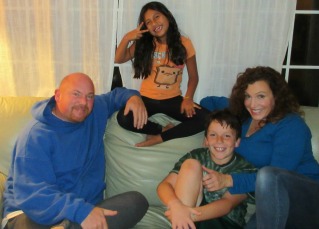 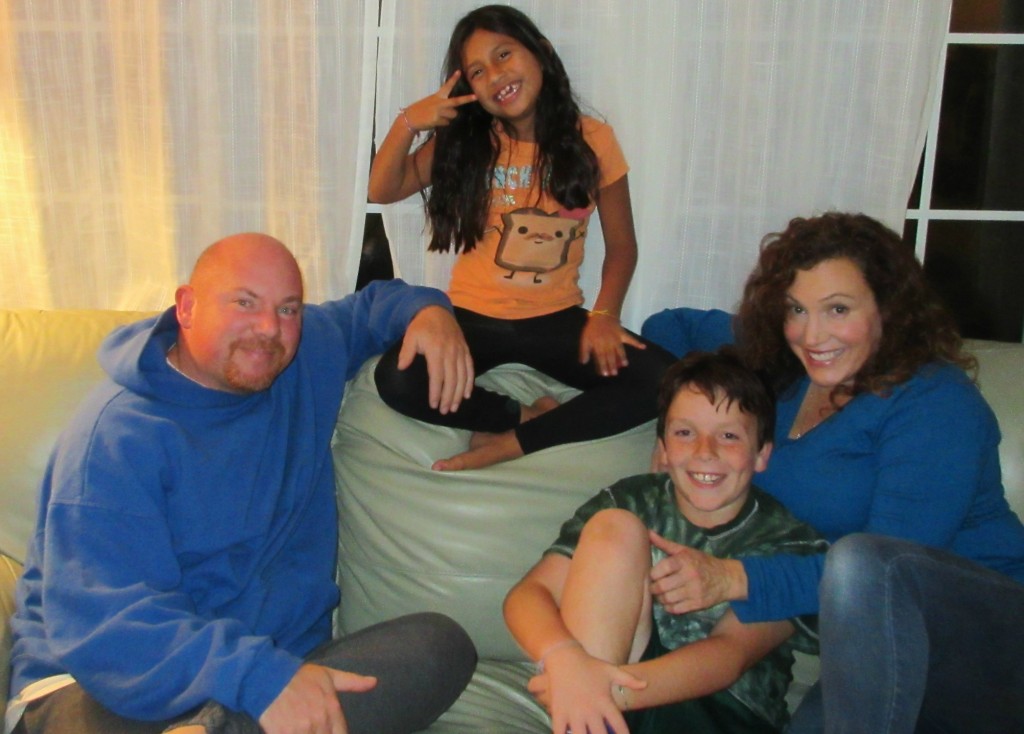 The Rodens – Dad, Paul; Mom, Joanne; nine-year-old Cole and seven-year-old Jenna, are an energetic family to say the least.Before leaving their Marmora home, I watched a wrestling contest between Jenna and Cole, witnessed feats of acrobatic agility by Jenna, and learned about both kids’ multiple sports team participation, coached, naturally, by their parents: cheerleading for Joanne, club soccer for Paul.

But when it was time to take a picture, the family settled down, Cole snuggling up to his mom, Jenna climbing up her dad’s shoulders to perch on the couch’s back. The love in the room was palpable, as much in their playfulness with each other as in their comfort in one another’s presence.

Joanne talked about the day they were told they would be bringing Cole home.

“You wait for so long and then it just happens one day. It was a shock, but it was such a joy. I remember thinking, ‘I’m so blessed. I can’t believe that I can be a mother thanks to what a mother gave me,” she said. “It’s the best gift in the world.”

The Rodens, married in 1998, adopted both of their children through Catholic Charities after six years of trying unsuccessfully to have children. Cole was adopted in 2005; Jenna in 2007. The couple’s approach with their children has always been total openness about the adoption process.

“You were blessed with this gift and you were chosen,” Joanne said. “It makes you want to make the birth family proud, to feel that they made the right decision.”

The openness of the Rodens’ adoption reflects a wider trend in domestic adoptions in the U.S. In 2012 the Evan B. Donaldson Adoption Institute estimated that in 95 percent of U.S. infant adoptions there is at least some contact between birth and adoptive parents. In earlier times, there was none.

This openness can present challenges for both parents and children.

“Adoption is really complicated in that we have to think through not just the immediate situation but what this is going to look like for the rest of your life. That baby grows up,” said Sylvia Loumeau, director of Catholic Charities’ adoptions program. “People need to be well-prepared prior to adoption, and for that counseling is really critical.”

In the case of the Rodens, contact with the children’s biological family has been a great success and become a crucial part of the family’s relationships. Exemplary is the case of Jenna and Cole’s Uncle Anthony.

“We were open to that,” Paul said. “If it hadn’t been a good experience we just wouldn’t have done it anymore, but it turned out to be great. Both of the kids love him and he loves the kids. The neat thing is he calls Jenna his niece.”

“That’s a gift that you give to your children, that they get to kind of know where they came from. I think it’s best that they know what they can know,” Joanne said. “We all come together in love with this child.”

When the Rodens approached Catholic Charities to begin the adoption process, they first made a profile about themselves to be included in a book of prospective parents. Couples can often wait years, but Cole’s birth mother chose the Rodens to be interviewed sooner than they had anticipated.

“It was weird because she and her parents and her family members all picked us separately. Each of them took the book and said, ‘It’s them,’” Joanne said. “It’s the mother’s choice, and it should be. The adoptive parents have to be people that the mother is comfortable with.”

Two years later, a baby girl became available for adoption. Normally couples only adopted one child from the agency because of the long waiting list, but because of limited prenatal information for this particular child, the Roden family became eligible once again.

“It was all God’s plan. I just say that it was his plan the whole time,” Joanne added.

Still a certified adoptions agency, Catholic Charities has facilitated adoptions in the Diocese of Camden for at least 80 years, placing at least 1,600 children for adoption. Today, the agency facilitates few traditional adoptions. Their services focus mostly on helping to organize search and reunions between adoptees and their birthparents, including counseling services.

For more on the search and reunion aspect of the agency’s services, see Love At First Sight: The Changing Face of Adoptions at Catholic Charities.