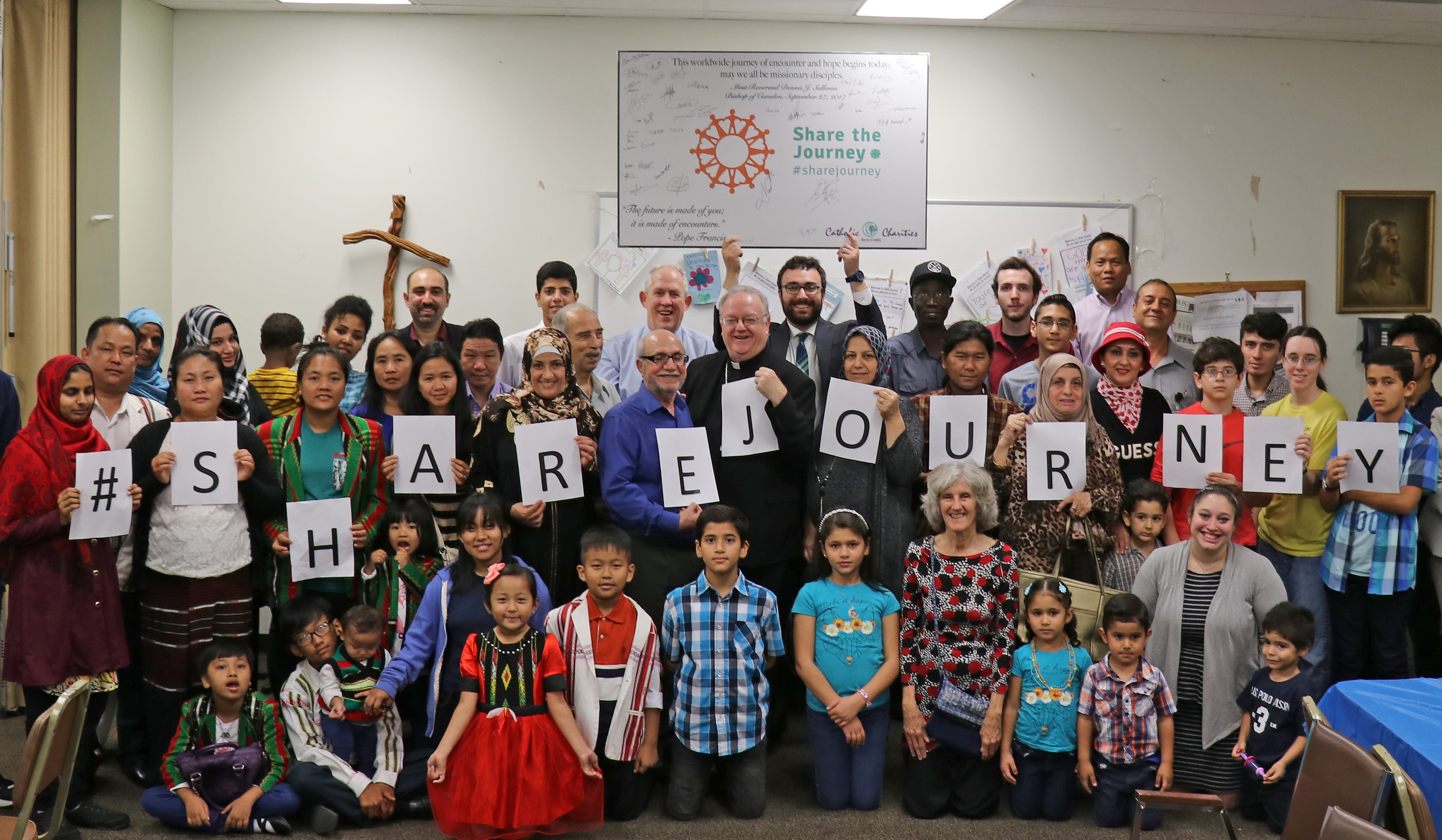 Kevin Hickey, Executive Director of Catholic Charities, Diocese of Camden, held up a framed picture of Pope Francis – a picture that normally sits on his desk any other day. In front of him were 44 refugees who had been resettled through Catholic Charities’ refugee resettlement program. Beside him stood Bishop Dennis Sullivan.  Motioning towards the picture of Pope Francis, Hickey said, “This man, the Pope – this is Bishop’s Sullivan’s boss,” as laughter and gasps filled the room.

Addressing the refugees and migrants, Bishop Sullivan said, “When I look at you, I don’t see if you’re from Burma or Syria or anywhere else. I see you as children of God, I respect you, and in a very real sense, I love you. And no matter what your faith, you are welcome here.”

He continued, “We are here to be your companion, to share the journey. That is the message that the Pope has sent to the whole church – over a billion Catholics from all over the world.”

It was clear by the many nods and intent expressions on the faces of the refugee clients that most of them understood English. But Catholic Charities staff members, Sarah Aljanabi and Francis Lian, translated for the rest of the clients who were still in the process of learning. Aljanabi and Lian were once refugees themselves from Iraq and Myanmar, respectively, and now work full-time for Catholic Charities’ refugee resettlement program.

Bishop Sullivan, Catholic Charities staff, volunteers from the community, and these 44 refugee all gathered on September 27 – a day that marked the beginning of a worldwide campaign in support of migrants and refugees called Share the Journey that was launched by Pope Francis.

Kevin Hickey remarked, “Our faith calls on us to welcome refugees and asylum-seekers. We are all children of God, and God calls us to love our neighbor. Our neighbors live across the street, across the country, across borders, oceans and hemispheres. Our neighbors don’t always look like us, pray like us, dress like us or talk like us, but each one deserves a chance to flourish in this life.”

He continued, “Parents and children desperately need food, shelter, safety, and a chance to rebuild their lives. Our Church teaches that people have a right to meet their needs at home and the right to leave when they cannot. Governments have a duty to protect them, and it is our obligation to help those who are suffering. The U.S. has enough resources, that – if well spent — can support the needy here and abroad.”

The refugee clients of Catholic Charities are men, women, teenagers, children of all ages, from all over the world: Myanmar, Syria, Uganda, Afghanistan, Pakistan, Ethiopia, among others. All of them are from war-torn or post-conflict regions of the world and have fled violence and persecution in hopes of finding a better life.

Following the formal program, the Bishop, staff and refugees shared a meal together and mingled with each other in the Camden office of Catholic Charities – normally a room where ESL (English as a Second Language) is taught three times a week.

Sponsored internationally by Caritas Internationalis and in the U.S. by the U.S. Conference of Catholic Bishops (USCCB), Catholic Charities USA (CCUSA) and Catholic Relief Services (CRS), the Share the Journey (use italics consistently for the name of this campaign) campaign aims to engage the Church and others who care about migrants and refugees, around the world and in the United States. Through education and advocacy, the campaign seeks to affect both personal feelings and opinions as well as public policy. It is a call to prayer, to reflection and to action. Pope Francis launched the campaign by performing a symbolic gesture of “reaching out” to migrants and refugees, encouraging others to join him.

The campaign invites Catholics throughout the U.S. to show their compassion and to Share the Journey with the millions of people across the globe who are fleeing poverty, oppression, war and disaster. Just as Jesus journeyed to share the Gospel of love and sacrificed for others, Catholics in the U.S. are being called to share the physical and emotional journey with migrants and refugees by extending the hand of dignity, love and support.

Such journeys toward new understanding and compassion often begin with a personal encounter with one who had previously been a stranger, whose customs were unfamiliar, and whose life stories were unknown. It is hoped that, through this campaign, Catholics everywhere will begin a journey of personal engagement with those among us who need our help, as well as a journey of personal commitment to use their voices in support of programs and policies which benefit individuals and families desperate to rebuild their lives.

“It’s an honor to be here today, and it’s an honor to be in this country,” said Muhammad Zafir, a 19 year old refugee from Pakistan who was accompanied by his mother and sister. “It really has been a journey, but I’m just so happy that it can be continued in a peaceful place where my family and I are welcomed,” he said, beaming.