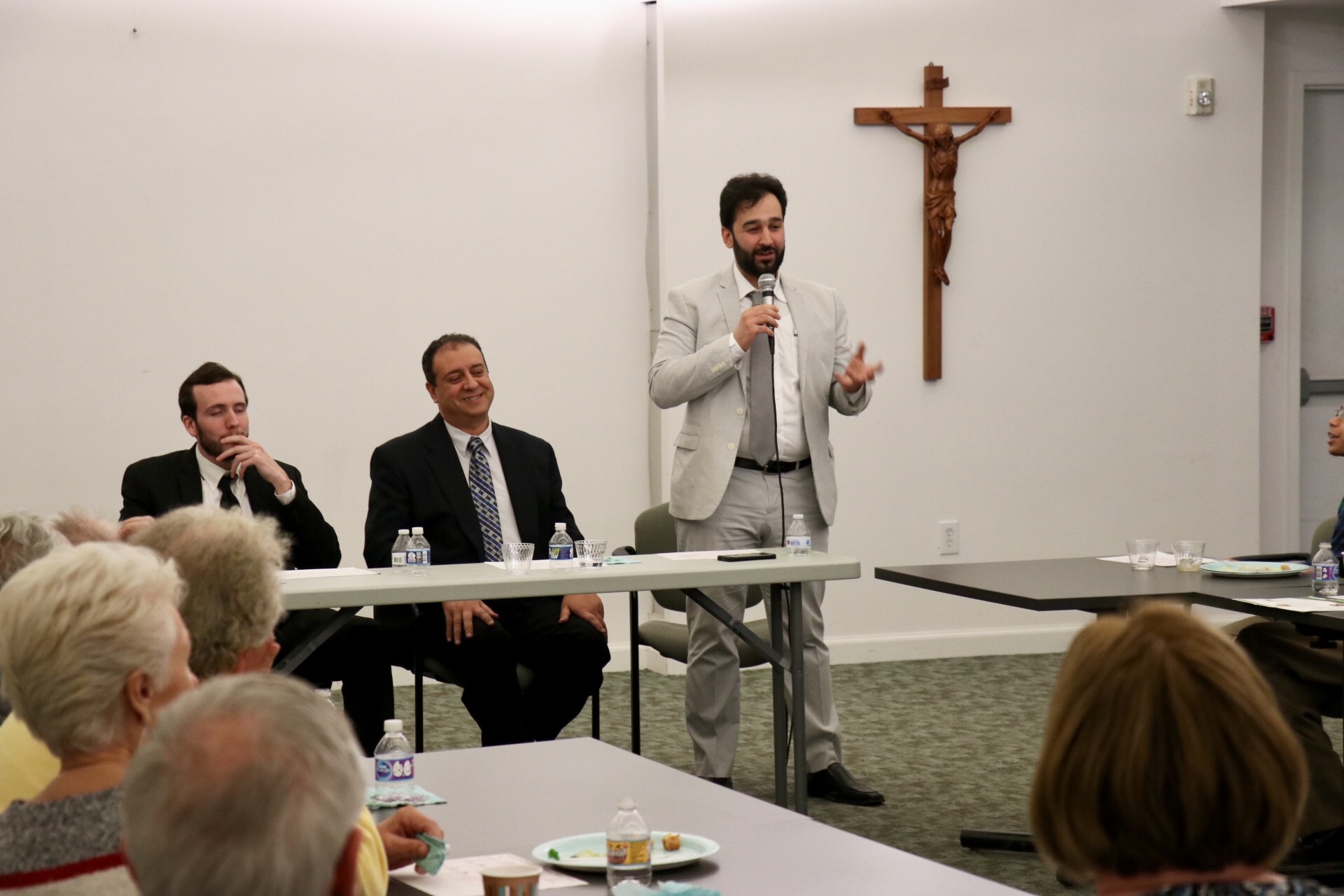 They came with an open mind to learn and to understand. Parishioners, clergy, religious and interested community members. About 25 of them. They gathered in the parish center of Saint Thomas More in Cherry Hill to share a meal as Catholic Charities panelists shared with them some of the journeys that bring refugees from war torn areas around the world to new lives here in the United States.

They asked lots of questions: What is the vetting process? Who decides which refugees come into the country? How do you ensure that these refugees aren’t a threat? Why do refugees leave their home countries? What happens once refugees arrive in this country? What’s the role of Catholic Charities?

Daniel Davis, an AmeriCorps volunteer with Catholic Charities and fluent Arabic speaker, described the application and vetting process, which typically takes three years of extensive background checks and verification that applicant families are in grave danger if they remain in their homeland.

“These families don’t come here because they want to leave their home countries. Not many people want to uproot their entire lives to move to a country that they don’t know and start their entire lives from scratch,” he explained. “They come here because there is no other option. They, and their families, flee because of war, persecution, genocide, and other life-threatening situations.”

Eyes widened and whispers filled the room as Davis shared short stories of refugees who he works with as a case manager — as well as the situations that led them to flee.

The panel discussion was held in light of the Share the Journey campaign launched by Pope Francis, which calls Catholics and all people of good will to listen to stories of migrants and refugees and provide meaningful places for them to interact — and by doing so, creating a culture of encounter.

Added one attendee, “Listening to these [refugee] stories… I’m amazed at how people can undergo such trauma yet emerge with such resilience. At the end of the day, they want the same things for their families that we want — a safe place to live and opportunities to lead good and prosperous lives.”

Another panelist was Tarek Mousa, a native Egyptian, Coptic Christian, and currently an ESL (English as a Second Language) teacher for Catholic Charities. Mousa detailed various volunteer opportunities for South Jersey residents interested in becoming more directly involved with helping newcomers to the area assimilate and settle. He also described ways that refugee clients themselves get involved in the community and immerse themselves in American culture.

“The refugee resettlement program is only as strong as the community that supports it,“ added Daniel Davis. 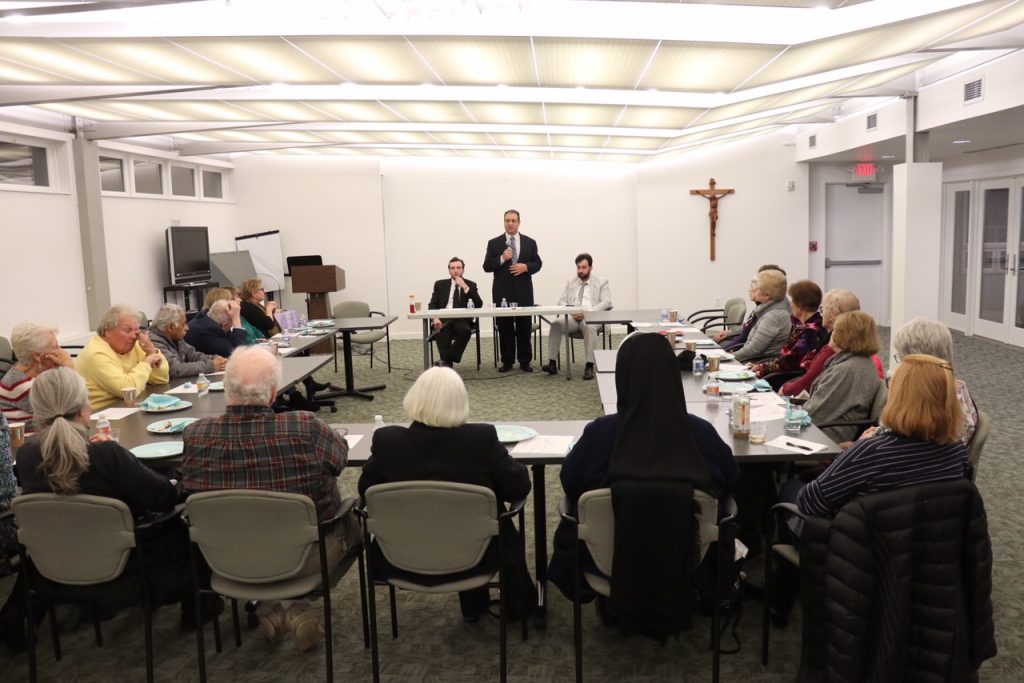 One couple raised their hands, asking, “We want to help. What can we do to volunteer?”

Others chimed in, asking whom they should write checks to in order to help families start their new life here in the United States.

Offering a first-hand account of refugee resettlement was Moustafa Aldoori, a case manager for Catholic Charities who helps clients find housing and employment.

“I see things from both sides — as a refugee myself who came here, and as a case manager who now helps resettle them.”

Fifteen years ago, Aldoori lived comfortably with his family in Baghdad, Iraq. His father owned his own business and the family was thriving financially. But the war changed everything.

“The city and the country lost stability. We would hear about people getting robbed, kidnapped, and threatened with death. But we had a good life there. We didn’t want to leave,” he explained.

That decision to stay almost proved fatal when Aldoori, 15 years old at the time, was kidnapped and held for ransom for nine days, where he was beaten and tortured. His attackers would repeatedly call his parents, demanding a price for their son’s return.

“My parents spent all the money they had, desperate to get me back. They had to borrow money from friends and neighbors. Ultimately they were able to come up with money and my captors let me go,“ he explained. “It was only nine days, but I’ll never forget seeing my parents for the first time after being kidnapped. They looked like they aged 10 years.” 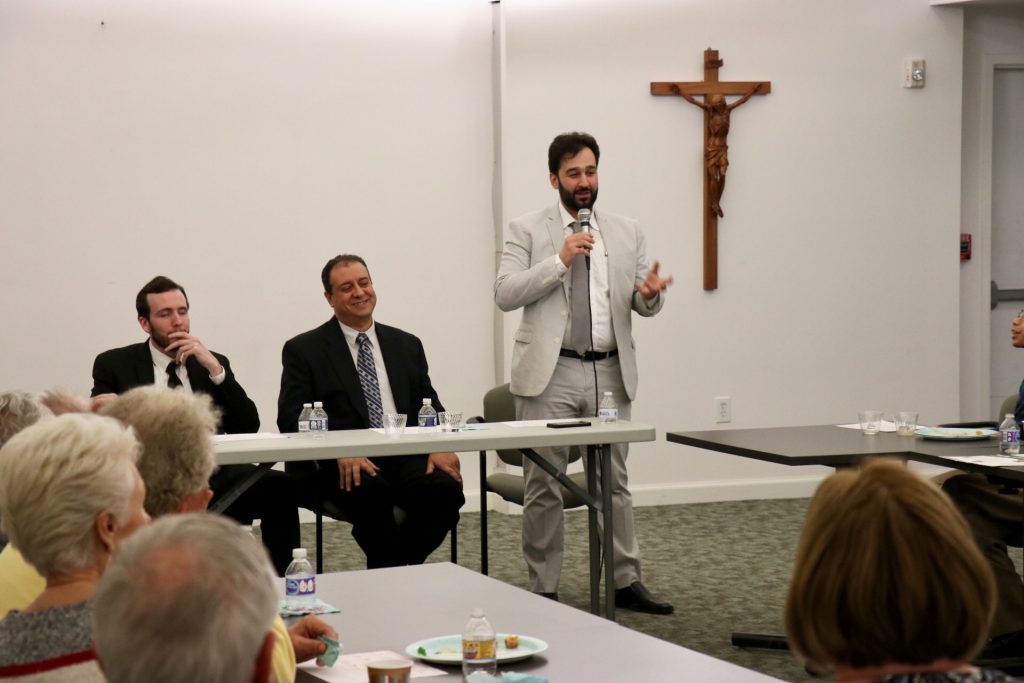 Moustafa Aldoori, a case manager for Catholic Charities, speaks at a panel discussion on refugee resettlement at Saint Thomas More Parish, Cherry Hill. After being kidnapped and held for ransom for nine days when he was 15 years old, he and his family went through a three-year vetting process to come to the United States. Seated are two other Catholic Charities representatives, Daniel Davis, (left), an AmeriCorps volunteer, and Tarek Mousa, an ESL (English as a Second Language) teacher.

Aldoori further explained, “I was one of the lucky ones. With most of the ransom kidnappings, parents will pay the kidnappers, but then would get a call — telling them where to find their child’s body.”

The family was left with no money — and no option but to flee their country to Syria, which was safe at the time.

After a three year screening process, Aldoori arrived in the U.S. in 2008 with his family, but no money and no English skills. He was resettled in South Jersey through Catholic Charities who found him a home and helped the family find work. He worked two jobs and saved for college, began working for Catholic Charities, and now has a real estate license.

Sister Ann Byrnes, organizer of the event, noted, “The presentations and discussions were eye-opening and truly helped to enlighten everyone about refugees and the challenges they face both here and in their home countries.”

The attendees introduced themselves to panelists as the evening wound down, shaking hands, thanking them for sharing their stories, and asking what they can do to help support and engage with their refugee neighbors in their community.