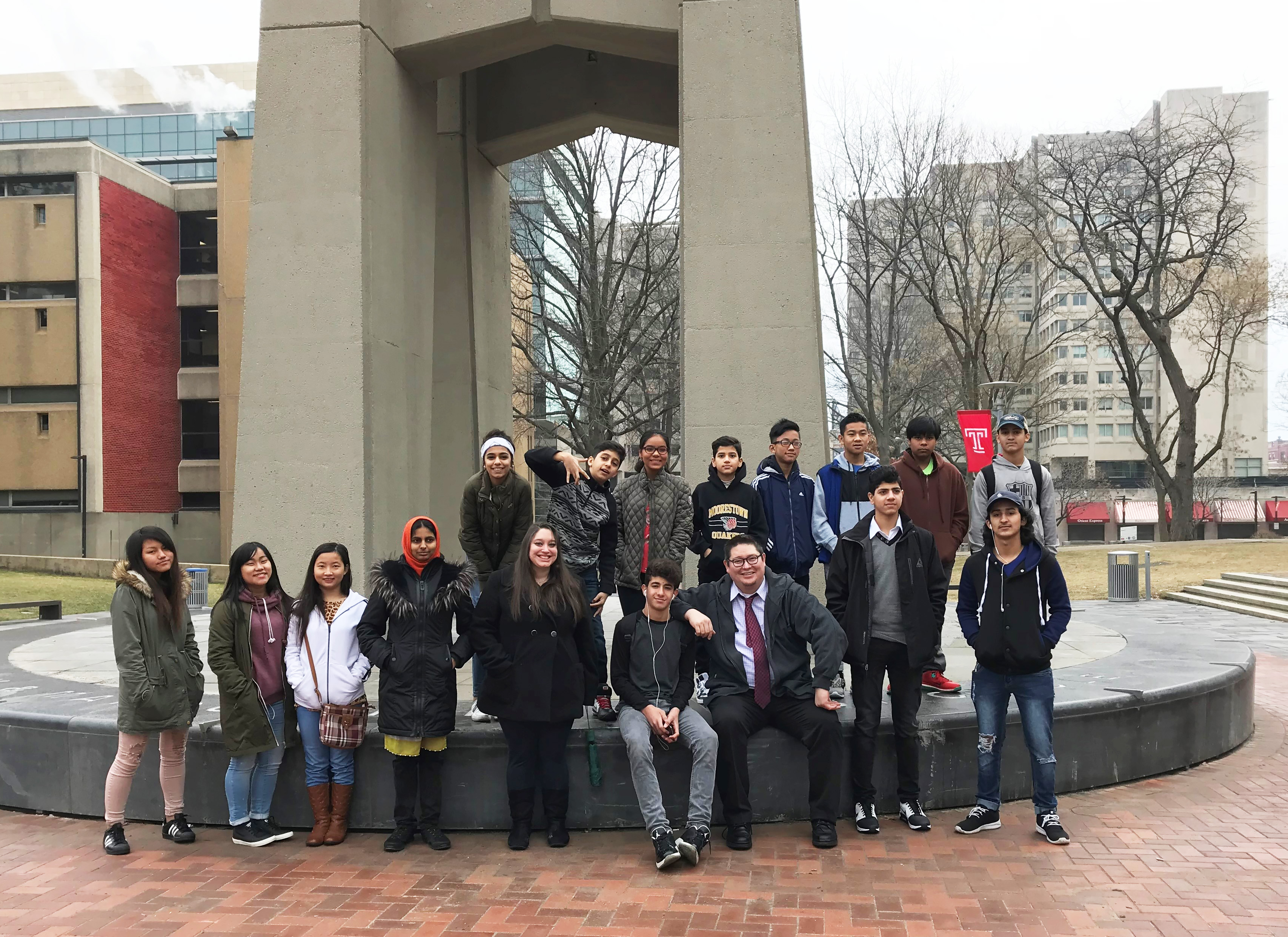 “If you could be anything when you grow up, what would you want to be?”

It is a question that many young Americans have been asked. Often adults use it as a conversation starter. Other times, it’s a question that encourages youth to use their imaginations and to think about the possibilities ahead of them.

But for some preteens and teens in South Jersey, it’s a question that they’d never been asked before in their lives. Their earliest years were not geared toward the endless possibilities on the horizon. It was a matter of surviving and staying safe in the war-torn countries from where they came.

That was until they arrived to the United States as refugees and were resettled through Catholic Charities.
So, when Patrick Barry, director of Refugee Resettlement of Catholic Charities, asked a group of 15 refugee teens about what they had planned for the future, his question was met with some pensive looks as they stood at the entrance to Temple University in Philadelphia on Feb. 10.

“I want to be a police officer,” said a teenage boy from Syria. When asked why, he answered, “I want to protect people.”

“A journalist!” shouted another girl.

Others, like many native-born American teens, were unsure. But for most, this first trip to a university animated their thoughts and ideas unimaginable for them until now.

Daniel Davis, an AmeriCorps volunteer at Catholic Charities and Temple graduate, gave the group a tour of the campus, where they received information about various programs and majors that might be of interest to them.

The drizzling rain did not dampen their boundless curiosity, as they pointed at and asked questions about every building in sight: the science building, the arts center, the library, the cafeteria. Adding to this excitement were the remnant decorations and energy on the campus of the Eagles’ Super Bowl victory — another aspect of American culture which fascinated the young visitors.

In addition to the campus tour, the day’s agenda included lunch in the university cafeteria and a collegiate basketball game.

Explained Barry, “It’s important for these young teens to think about opportunities that they may have not ever considered until now. These are eager, energetic and smart kids with a whole lot to offer. We want to show them first-hand what opportunity looks like in our country, and allow them to ask questions and talk openly and think out loud about their interests and their futures.”

At lunchtime, the teens stopped in their tracks at the sight of the bountiful buffet of college cafeteria food — a dozen cereal options, pizza, the endless salad bar, the soft-serve ice cream machine.

The students’ fatigue from “food comas” quickly dissipated as they piled into the Temple basketball gymnasium to watch a women’s basketball game — an event that would seem almost insignificant after the excitement of the Eagles’ Super Bowl victory. Not for this group.

Upon discovering that those who cheered the loudest would be featured on the big-screen TV, the excitement was uncontainable, as the camera kept flashing toward the group as they cheered and danced, waving their hands wildly and leaping out of their seats every time the home team scored a point.

“I’ve been to a lot of sports games, but this is the most I’ve been featured on the TV in my entire life,” laughed one of the chaperones.

Added Barry, “A lot of the girls in this group come from countries where sports aren’t encouraged or even permitted for women. They’ve never been given the option to participate in the games or competitions, or feel that sense of comradery and sportsmanship that come with it. But witnessing these women playing basketball … it’s inspiring and empowering for them.”

Women’s basketball, endless food buffets, whole buildings dedicated to science, the arts and business. The long, exciting day ended for these 15 teens. But their hopes and dreams have only just begun. On a campus still basking in the thrill of the Eagles’ victory, these young refugees had taken their first steps in preparing for the most important game — a winning future in the game of life.